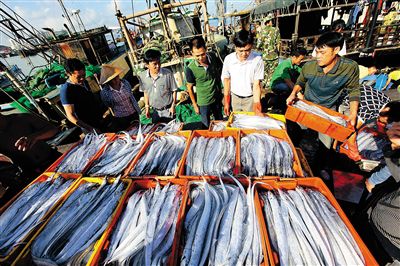 A fleet of 30 Chinese fishing boats left an area of the highly disputed Spratly Islands and made its way to Hainan province in mainland China, the Chinese government said Thursday.

In a report posted on its web portal, the Chinese government said that the fleet "took refuge" at the bay of Meiji Reef "during a bout of bad weather" last week and "decided to return to Sanya Port after a meeting on Wednesday when the weather eased."

The Philippines refer to the Meiji Reef as Panganiban Reef or Mischief Reef.

China said that the return of the fleet to Sanya Port in the southernmost province of Hainan brought an end to the fleet's 13-day voyage.

The fleet, which includes a 3,000-ton lead boat carrying fresh water, fuel and other supplies, is 615 nautical miles from Sanya and is expected to arrive at the city within four days.

It left Sanya Port on July 12 and arrived at Fiery Cross Reef, Zamora or Subi Reef and Mischief Reef of the Spratly group of islands.

"Chinese fishermen are setting their sights on the vast and largely untapped fishery resources in the South China Sea," the Chinese government said.

China earlier this week officially set up the city of Sansha on Yongxing Island, which will administer the Spratly Islands, Paracel Islands, Macclesfield Bank and the recently disputed Scarborough (Panatag) Shoal.

Beijing also plans to deploy a military garrison in the newly found city, which Vietnam and the Philippines protested.

Manila and Hanoi filed separate diplomatic protests on Beijing's plan to put up a defense structure in the area.