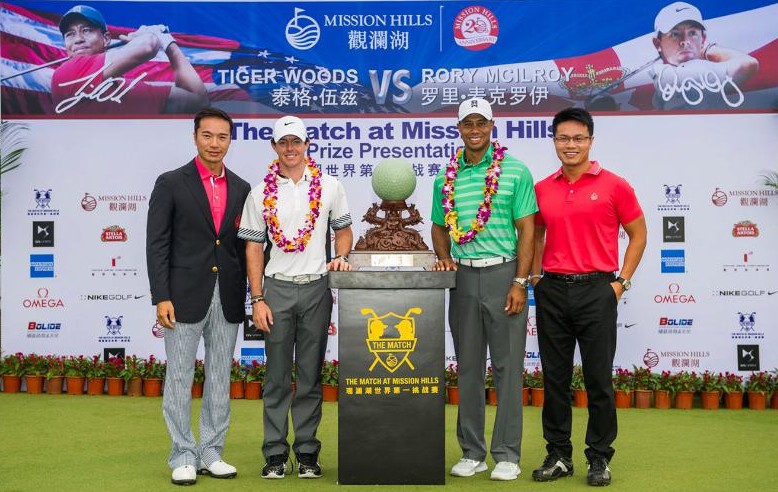 A resurgent Rory McIlroy shot a six-under-par 67 to beat World No. 1 Tiger Woods by a shot to win The Match at Mission Hills, the duo’s 18-hole showdown on Hainan Island off the south coast of China.

McIlroy, the World No. 6, carded an eagle, seven birdies, one bogey and a double-bogey over the 7,301-yard par-73 Blackstone Course to edge his great rival and friend in front of an estimated 20,000 spectators at the 180-hole Mission Hills Haikou resort.

"The crowds that came out to watch us today were absolutely phenomenal," said McIlroy, who was familiar with the Blackstone layout after competing in the Omega Mission Hills World Cup two years ago.

"It’s great to be back here again at Mission Hills Haikou and play this wonderful golf course. It brings back some great memories from playing at the World Cup a couple of years ago. It was great to come out on top again, but also it’s great to bring these sort of events to China and inspire the next generation of Chinese golfers."

McIlroy, World No. 1 until deposed by Woods in March, opened with two birdies and then it was Woods’ turn to bag back-to-back birdies, the American then leading or sharing the lead until hole 17.

Woods found himself two ahead after McIlroy double-bogeyed the par-three fifth following a three-putt, while Woods also fell back to even par after dropping shots at six and seven. The 14-time major winner birdied nine to lead by one at the turn, before both players went into attack mode on the back nine.

"I started off well, birdied the first two, and then had a little bit of a dodgy spell in the middle, then played nicely on the back nine and hit some really good shots," said McIlroy, a two-time major winner.

"On the back nine, there are three par-fives and a driveable par-four that gave us an opportunity to make some birdies and we both took advantage of that. It was good to shoot some low numbers and we made it pretty interesting at the end."

McIlroy was impressed with Woods, who was playing the Blackstone Course for the first time as he made his maiden visit to Hainan Island.

"Any golf course he goes to, you give him a target to hit at, he usually hits it. As long as his caddie knew to point him in the right direction, he was going to do the rest," McIlroy said.

"He’s had a great season, really good. People say what they want about him not winning a major, but five wins on the PGA Tour, with the strength in depth these days, is very impressive. He’s playing well again and back to where he needs to be."

Speaking to Tiger after The Match, Ken Chu, Chairman and CEO of Mission Hills Group, said: "We are very proud, very honored to play host to your very first visit to China, and 12 years later, to play host to your first visit to Hainan Island as well. So it’s a wonderful relationship that we have created and thank you for all your support to the development of golf in China. "

Prior to the Match, the two golfing greats took part in a coaching clinic observed by 120 Chinese juniors from the Mission Hills Series Junior Tour, during which they passed on valuable coaching tips to the youngsters.

Tiger and Rory were then joined by Chinese golf prodigy Guan Tianlang to compete in a skills challenge which saw the players from three generations aim for a golf range target. The contest was finally won by the teenager from the Guangdong province

The Blackstone Course also hosted the Mission Hills World Celebrity Pro-Am in 2010 and 2012. The Match at Mission Hills is the latest event to be hosted by the Mission Hills Group, which has staged over 100 international tournaments and been at the forefront of developing golf in China since staging the World Cup of Golf in 1995.

SOURCE: yahoo.com
Editorial Message
This site contains materials from other clearly stated media sources for the purpose of discussion stimulation and content enrichment among our members only.
whatsonsanya.com does not necessarily endorse their views or the accuracy of their content. For copyright infringement issues please contact editor@whatsonsanya.com