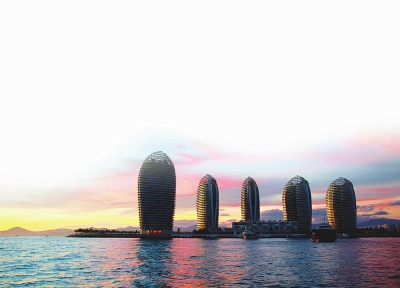 Sanya Phoenix Island
Phoenix Island, which is located in the center of the Sunshine Cost Resort, Sanya Bay, is an artificial island built on the reefs. It covers an area of 365,000 square meters, and is 1129 meters in length and 350 meters to 375 meters in width. Blessed with exceptional natural beauty, the Sanya Phoenix Island is destined to become a new landmark for Sanya, and perhaps even cities of southern China.

The super-star hotel on the island is also an eye-catching project, and will start construction this year. Jointly designed by the world’s top design company and hotel management company, the 200-meter 7-star hotel will become the first maritime super-star hotel in China, the highest building in Sanya and almost certainly a new landmark of Hainan province.

Next news: Superstar Aquarius to start its 2nd homeport deployment in Sanya in Nov