Updated: 2012-06-29 12:55:18
At just 550 miles long it may be the shortest of all the offshore tests but Leg 9 still has the potential to present race-threatening conditions for the teams.

The sprint from Lorient in northwest France to Galway on the east coast of Ireland will only take a couple of days to complete but as this race has seen so many times during its 39,000-mile odyssey, fortunes can easily be reversed in a matter of hours.

The Celtic Sea, the stretch of water that lies between the Volvo Ocean Race fleet and the overall finish line, is notorious for strong winds and big seas, churned up by the Celtic continental shelf.

On leaving Lorient, the fleet must first sail south, leaving Ile de Groix and Belle Ile, small islands in the Bay of Biscay, to starboard before charging north west towards the next waypoint — Fastnet Rock.

The iconic landmark, renowned among sailors, is the most southerly point of Ireland, and must be left to port.

The biennial Fastnet Race, from the Isle of Wight in the UK, round Fastnet Rock and back to Plymouth, has on many occasions seen boats hit by ferocious weather in the Celtic Sea.

In 1979 a severe storm swept through the fleet resulting in the deaths of 15 sailors, while in 1985 Duran Duran singer Simon Le Bon was one of five who spent 20 minutes trapped under the hull of his capsized yacht Drum, shortly before he competed with the yacht in the Whitbread Round the World Race.

Most recently in the 2011 race, won by Ian Walker’s Abu Dhabi Ocean Racing, the 100ft superyacht Rambler, one of the fastest raceboats in the world, capsized off Fastnet Rock.

Just to throw an extra challenge into the race, the fleet will have to dodge shipping traffic three miles south east of Fastnet Rock.

Once round the rock, the fleet will likely face strong westerly breeze and huge seas as they pass Blasket Island on the south-west tip of Ireland.

From there it’s a straight run up to the Aran Islands, a set of three islands marking the entrance to Galway bay that boast 200-metre tall cliffs, making the most of the strong currents that accelerate round the many headlands.

Eiragh lighthouse, at the western end of the Aran Islands, must be left to starboard before the fleet turn east and head for the finish line in Galway Bay.

As the scoreboard stands now, Groupama sailing team have 219 points and a 23-point lead at the head of the standings over PUMA Ocean Racing powered by BERG on 196, with CAMPER with Emirates Team New Zealand just five points further behind in third.

A nightmare for Team Telefónica on Leg 8, in which they finished fifth after suffering serious breakages, sees them tied on equal points with CAMPER.

Abu Dhabi Ocean Racing have 122 points while Team Sanya have 39.

Leg 9 starts at 1102 UTC, and the Volvo Ocean Race team will be bringing fans round-the-clock coverage at www.volvooceanrace.com and www.livestream.com/volvooceanrace.

The teams will take part in the Bretagne In-Port Race on Saturday, 24 hours before the start of the leg. 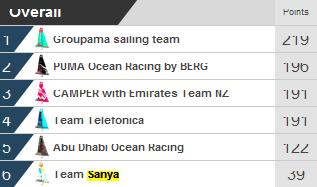