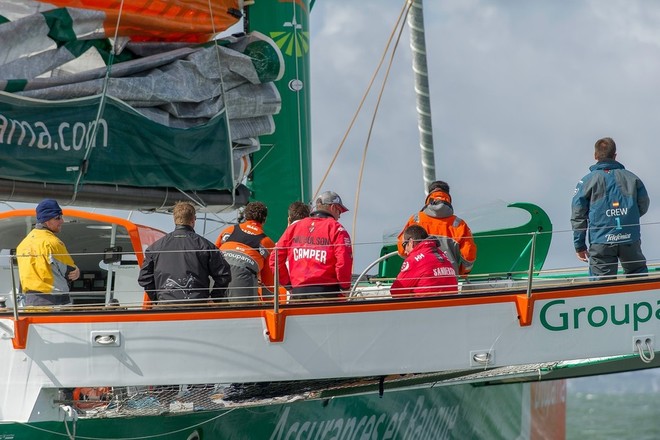 With around 20 knots of wind and some big seas off Lorient on Friday morning, Cammas gave the monohull sailors an exhilarating two hour taste of high speed multihull sailing, blasting along at up to 34 knots.

‘We wanted to introduce our Anglo-Saxon friends to the French way of sailing — on a multihull,’ Cammas said.

‘Mike, Chris and Horacio came along and it was a chance for them to understand the speed difference and size also.

‘I think they had a really good time sailing at this speed with such ease. They know their stuff obviously, and I think they really enjoyed it and appreciated the boat.’

‘It was pretty cool,’ said Nicholson afterwards. ‘That is the easiest way to do over 30 knots I have ever seen.

‘When you think how hard and difficult it is to do those speeds in a monohull and then you realise that 30 knots on the trimaran is part of every day life.

‘It was fascinating to watch the leeward hull and how it gets torqued around, and yet the mast and sails are going through the air very nicely,’ he said. ‘There are a lot of forces going on with the boat and a lot happening at any one time.

‘I can’t imagine doing that singlehanded like Franck did,’ Nicholson added. ‘There is so much that can go wrong. I’m sure when times are good then great but when the weather gets bad or there is a problem, that boat would be a monster.

‘I have followed this boat from when Groupama first launched it and I have a lot of friends who have sailed on it, so I have a lot of attachment to the boat,’ Sanderson said.

‘It is so powerful and you have to be respectful of the power. You can easily see that you would not want it to start telling you what to do.

‘We have always seen this enormous boat from outside so to be able to get on board was a nice invitation,’ said Carabelli. ‘We spent a great morning cruising around at 25 or 30 knots.

‘The way this boat works and how everything moves with the rig is a completely different world. It is difficult to find a spot on the boat where it doesn’t throw you around so you have to hold on.

‘Chris and Mike and myself were fully involved and we were able to drive and that is an amazing experience to be able to helm a boat like that.

‘We had 34 knots and that is a very good speed and not at all scary. The top speed of this boat is probably more than 40 knots and the speed we were doing today in a Volvo boat you would be at the limit.

‘Suddenly the world becomes a lot smaller place, that’s for sure.’

sail-world.com
Editorial Message
This site contains materials from other clearly stated media sources for the purpose of discussion stimulation and content enrichment among our members only.
whatsonsanya.com does not necessarily endorse their views or the accuracy of their content. For copyright infringement issues please contact editor@whatsonsanya.com