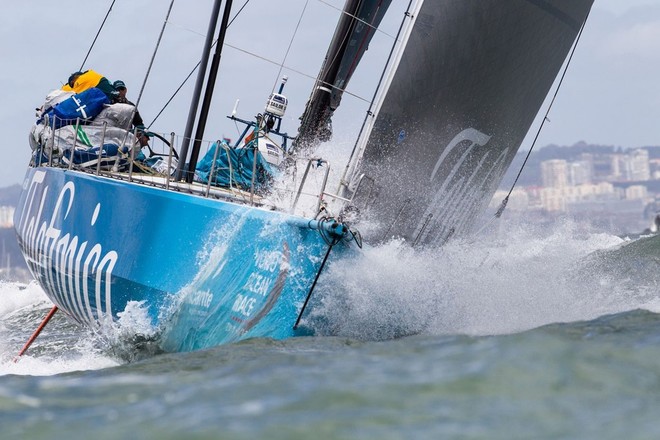 ‘Telefonica’ Maria Muina/Equipo Telefonica
In the Volvo Ocean Race, Team Telefónica skipper Iker Martínez says his Spanish team are focused on finishing the 2011-12 edition on a high after two broken rudders during Leg 8 from Lisbon to Lorient all but dashed their hopes of overall victory.

‘There is one offshore leg and two in-port races left to go and we will try to do our best in them,’ Martínez said.

Telefónica dominated the early part of the race, winning the opening three offshore legs and the V&A Waterfront In-Port Race in Cape Town, before being steadily pegged back by their rivals in the later legs.

Martínez said the closeness of the competition had built leg by leg, as the teams learned more and more about their boats and how to sail them at optimum performance.

‘At the regatta’s halfway point all the boats reach their full potential; that happens in all editions,’ he said. ‘At the start, we all have to learn about our boats and although each team prepares as much as they can, some have less time than others, so there are usually a lot of differences.

‘But at the halfway point, after so much time spent competing against each other, everyone has had the chance to learn about their boat and how to get the most out of it.

‘We all learn from each other too, and so it always happens that around the middle of the regatta that is becomes very even.’

Nevertheless, Martínez said he was proud of how his team had performed so well straight out of the blocks — something he put down to hours of painstaking training prior to the race and some smart thinking out on the racecourse.

‘We had some good legs at the beginning and that showed that our preparation had gone very well,’ he said. ‘Also, in some difficult situations, we took some very good decisions.’

However, a string of uncharacteristic errors in the Itajaí, Miami and Lisbon in-port races combined with consecutive fourth place finishes in the offshore legs to Miami and Lisbon, saw Telfónica relinquish their long time lead to Franck Cammas’ resurgent Groupama sailing team.

With only four points-scoring opportunities left before the end of the race, Martínez said his team had approached Leg 8 from Lisbon to Lorient with equal measures of confidence and determination.

‘We knew that the Leg 8 was important for us for the final result,’ Martínez said. ‘When you start getting to the last stages, it is harder for changes to happen in the overall standings.

‘We knew in this leg it was key for us to be close to Groupama, to try to get in front of them and to diminish the points. If we did that, and perhaps end up even on points, then everything would be decided on the last leg.

‘That was our goal: to arrive in Lorient with the same number of points, and then be able to fight it out in the last leg.’

With the forecast tight reach out to the Azores likely to favour their boat, Martínez said the Spanish team were confident of being in a strong position going into the high winds of the second section of the leg.

‘Our basic approach was to have the lead at the Azores,’ Martínez said. ’24 hours after departing, we were in an ideal position. We were leading the fleet and basically between our rivals and the place we were going. In sailing, that is a very secure place to be.’

Passing the Azores turning mark in the lead, Martínez said the wind strength began to increase quickly as they battled with Groupama and Puma for the top spot.

The angles were fast, we were in the lead, and that was an advantage,’ he said. ‘Every mile was key because in a short leg like this, four or five miles is a big distance, and 10 miles can turn into an unbeatable lead.
Even when they saw Groupama slow with a mainsail problem, Martínez said there was no let up on Telefónica.

‘They had to lower the mainsail and a crew member had to go on top of the mast,’ he said. ‘That’s where we lost sight of them. They were over 10 miles behind us and Puma was behind by six or seven miles.

‘At that point things were looking very good for us. We still had two sailing days ahead, but we really had all the conditions in our favour.’

As the conditions steadily worsened Telefónica were forced to reduce sail area to keep the boat on track, however Martínez said they were comfortable with the way the boat was performing and always in control.

‘The crew felt very confident about everything,’ he said. ‘We did not have any major problems. Even when the wind increased a lot and the conditions were tough, the boat kept going very well.’

Suddenly however, it was Telefónica who had to slow, after one of their two rudders snapped off and rounded the boat into the wind. Amazingly though, despite a hideous sea state, Martínez´s crew were able to fit a replacement rudder blade and set off in pursuit of the leaders.

Remarkably, just a few hours later, they were back in the lead. 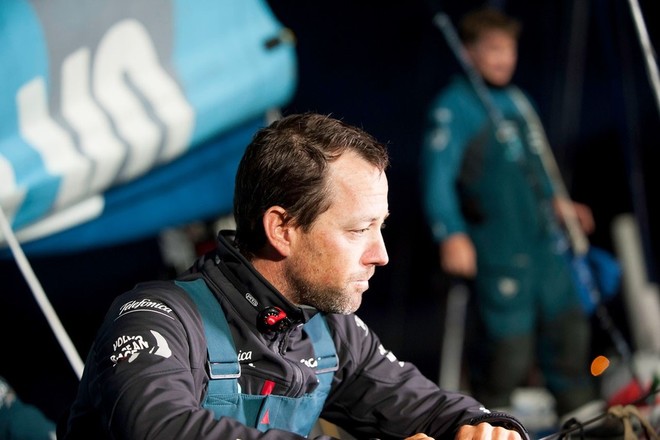 Team Telefonica, skipper by Iker Martinez
Martínez attributes the fast turnaround to a clever system designed prior to the race, based on information gleaned from rudder breakages in previous races.

‘That was a tough operation,’ he said. ‘That had never happened to me before, or to the majority of the crew. Capey (Andrew Cape, navigator) had broken a rudder in the previous edition with Puma, so we had come up with a system to do a quick change.

‘It was a lot easier that what we thought,’ Martínez said. ‘We lowered the sails, tidied up the boat, took out what was left of the broken rudder and prepared the system to insert the replacement.’

‘We had studied the replacement system so we would know what to do. So it went very well and we replaced the rudder quickly and we were back sailing in about an hour and a half.’

Only hours after regaining the lead however, the Spanish team were in trouble again when they snapped their replacement rudder. This sent them into a sudden uncontrolled ‘Chinese gybe’, which pinned the boat on its side with mast lying flat in the water.

‘When we broke the replacement rudder everything changed and was turned upside down,’ Martínez recalled. ‘The boat was completely heeled with the mast touching the water, spectacular to witness, but if no one has been hurt or has fallen into the water, then it is not too dangerous.’

Out of spare rudders, as Martínez’s crew began to restore order on board, they were faced with the grim realisation that their challenge for the overall race was all but over.

‘We calmly did what we had to do to straighten up the boat,’ he said. ‘There was a lot of wind, so we had to lower the mail sail. We only had one rudder that also had some damage.

‘Losing all of our rudders at that point could mean a very dangerous situation for the crew, and we could not ourselves at risk.

‘So we had to head for Lorient at cruising speed and in doing so, we lost our chances of winning the regatta. It was our only option, so that is what we did.’

Arriving in Lorient in fifth place behind Groupama, Camper, Puma and Abu Dhabi, Telefónica dropped to fourth in the overall standings, tied on points with third placed Camper after a tie break.

However, Martínez was pragmatic about his team’s situation and said they would regroup in time for the final three scoring opportunities: the Lorient In-Port Race, Leg 9 to Galway and the Galway In-Port Race.

‘Everything that happened we could not control,’ he said. ‘Sometimes things go well and other times they don’t. This time they did not.

‘We never ever thought about coming second in this race. We wanted to win it. Now that we cannot do that, to come in second or third is not too important for us.

‘What’s important for us is to finish the regatta with a good feeling, and with knowing that we’ve done all we could. As long as we have that, then that will be enough.’