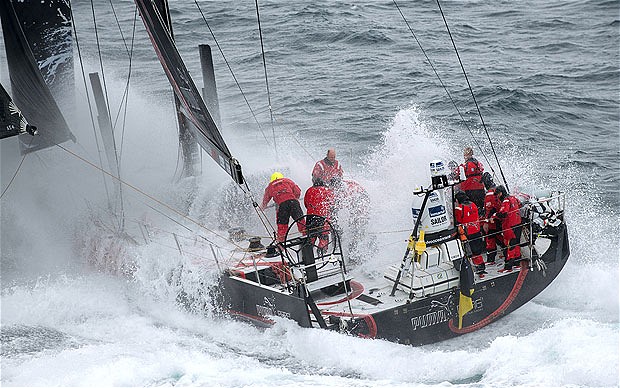 Up against it: Puma lie second behind favourites Groupama Photo: GETTY IMAGES
Skipper Ken Read said that Puma’s chances of winning this year’s Volvo Ocean Race were "slipping away" after Groupama became clear favourites for overall victory with one leg remaining.
Groupama’s win, after overcoming treacherous North Atlantic conditions from Lisbon, leaves skipper Franck Cammas on the verge of following Lionel Pean – in 1985 – as France’s only winner of the 39-year Volvo Ocean Race event.

In assessing Puma’s chances of an overall win, Read said: "So where do we go from here? Despite being less than pleased we have moved into second overall for the race, but we have lost valuable points to the race leader Groupama.

"Time is of the essence. We have to start gaining ground now, and the in-port Race in Lorient becomes that much more critical.

"I hope I’m wrong but I have a feeling we’ve seen the opportunity to win this race slipping away.”

Telefonica’s hopes of keeping the pressure up on Groupama were ruined as the Spanish team broke both rudders plus their spare and drifted from first to second last on the 1,940-nautical leg from Portugal.

As Read said, the in-port race in Lorient will be pivotal for Puma, with just two further chances to accrue points remaining in Galway at the beginning of July.

"I don’t want to say it’s a race for second place yet, but I have to give them credit," added Read.

"They’ve continued to get better and that’s what this race demands. They struggled in the beginning. But they keep getting better. Good for them, bad for us.

"It’s bitter sweet. We didn’t sail our best leg to be honest, and it’s at the wrong time. We made some mistakes. We kept it close like we always do, and usually when we keep it close we thrive in that situation."

SOURCE: telegraph.co.uk
Editorial Message
This site contains materials from other clearly stated media sources for the purpose of discussion stimulation and content enrichment among our members only.
whatsonsanya.com does not necessarily endorse their views or the accuracy of their content. For copyright infringement issues please contact editor@whatsonsanya.com