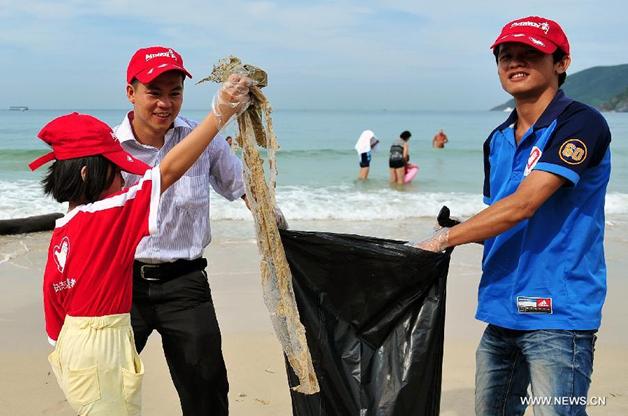 Volunteers pick up rubbish on the beach in Sanya, south China’s Hainan Province, on June 8, 2012, World Ocean Day. (Xinhua/Hou Jiansen)
This year’s World Oceans Day falls as the international community marks an important milestone: the thirtieth anniversary of the United Nations Convention on the Law of the Sea.

When the Convention opened for signature on 10 December 1982, it was rightly characterized as a "constitution for the oceans.” Forged through a process of negotiation among more than 150 States, the treaty is a living monument to international cooperation.

When it was adopted, the Convention on the Law of the Sea made treaty history. With 320 articles and 9 Annexes covering every aspect of the oceans and marine environment, the Convention sets out a delicate balance of rights and duties.

The protection of the world’s oceans and coasts is among the key goals of the United Nations Conference on Sustainable Development, which will open in Rio de Janeiro in just 12 days. The Convention is contributing to this goal through its provisions, including on the preservation of the marine environment, marine scientific research and the transfer of marine technology.

We must do more for our world’s oceans, which are threatened by pollution, depleted fishery resources, the impacts of climate change and the deterioration of the marine environment. Rio+20 must mobilize the United Nations, governments and other partners to improve the management and conservation of oceans through initiatives to curb overfishing, improve protection of the marine environment and reduce ocean pollution and the impact of climate change.

There could be no more fitting way to commemorate World Oceans Day than for all countries that have not yet done so to ratify the Convention on the Law of the Sea.

Let us make 2012 another milestone year for the world’s oceans, so that we can set sail toward the future we want.