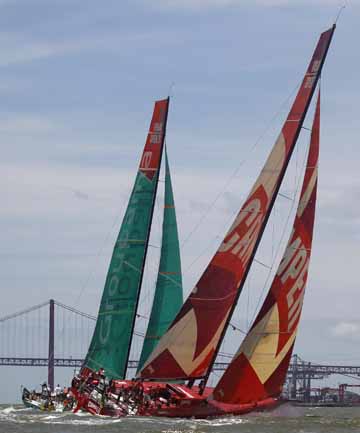 Camper finished third in a tight struggle in Portugal but still saw their place on the overall points table slide.

Puma finished second and the Kiwis third. Abu Dhabi were fourth, followed by Sanya while Telefonica continued their nightmare run in these short races.

With two legs and two in-port races left to sail, the overall picture remains close. Groupama lead by eight points from Telefónica, followed by Puma 13 points off the pace and Camper within 23 of the top.

But despite today’s solid effort – their sixth podium finish in eight in-port races – Camper slipped a further two points off Groupama’s hot pace at the top.

Despite exchanging leading positions several times with Camper as the fleet blasted down the Tagus River past Lisbon’s iconic 25th of April Bridge, Groupama rounded the first mark ahead and never looked back, holding onto the front spot for the remainder of the 11.6 mile course sailed in steady south-westerlies.

"Today is not as much doom and gloom as what people think. Today we wanted more but it could have been a whole lot worse as we’ve seen."

Next news: China’s MoF to auction bonds in billions on behalf of Hainan government