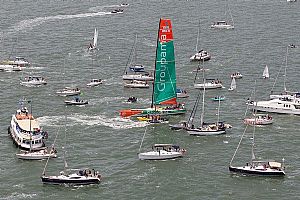 Groupama – the boat to be seen with right now – Ian Roman, VOR pic
Groupama’s crew extended their overall Volvo Ocean Race lead to eight points with a crucial victory in the Oeiras In-Port Race on Saturday, a result that gives the French crew a huge boost as they prepare for the Leg 8 race to their home port of Lorient, starting Sunday.

With four teams still vying for victory in what is the closest contest in the 39-year history of the Volvo Ocean Race, Groupama’s crew remained cool under pressure to secure the maximum six points and take their overall tally to 189.

With closest challenger Telefónica enduring another in-port race day to forget – after being to do a penalty turn, followed by a sail being dumped in the water, they finished last — Groupama’s lead jumped from three points to eight.

It was a fourth successive bottom-placed finish in an in-port race for Telefónica, which paid a hefty price for an aggressive rule infringement just after the start of the 11.6 nautical mile course.

Puma finished second, taking her overall score to 176 points to break the three-way tie at the top of the in-port race series standings.

Camper was third across the line, scoring four points, followed by Abu Dhabi with three points, Sanya with two and Telefónica in last, claiming just one point.

“This is a good moment for us,” Cammas said. "It’s above what we expected at the start in Alicante, so we’re going to enjoy it. We will try to do the best possible and will just see what happens in the next leg, but for sure we are going to enjoy this moment."

With so much at stake, the atmosphere was tense from well before the start-gun, and as soon as it fired, Telefónica and Puma were engaged in an aggressive downwind match racing-style battle.

The Spanish crew came off second best after the umpires ruled they had infringed on the Americans and ordered a penalty turn within one minute of the start.

As Iker Martínez’s crew fell to last place, a far too familiar in-port position for the former overall race leader, the fleet took off in about 16 knots of south-west wind on flat seas and powered by massive spinnakers.

The lead changed three times during the first of the four legs before Groupama rounded the top mark in first place, just seven seconds ahead of Camper, 18 seconds ahead of Abu Dhabi, followed by Puma, Sanya and Telefónica.

Groupama continued to lead, while Puma edged into second place ahead of Camper, followed by Abu Dhabi, Sanya and Telefónica, as they rounded the second mark, where the course was shortened.

Telefónica’s woes continued on the third leg, when her masthead halyard broke, dumping the spinnaker into the water, while Sanya intentionally dumped theirs overboard after the halyard failed to unlock from the mast.

Positions, however, remained unchanged, with Groupama cruising to her second in-port victory, finishing 22 seconds ahead of Puma, whose skipper Ken Read joked that race organisers should start charging admission for such hotly contested conditions.

"Groupama aren’t (sic) showing too many chinks in their armour right now,” Read said. "They’re sailing very, very well and had a great start. We’ve got to get a little bit better, but we’re getting there.

"They’re not going to be feeling very secure up there though; they know there’s a lot of racing left. There’s still a couple of guys crawling around where we are too, so we need to just keep doing well, keep doing the right thing, and hopefully good things will happen."

Sailors and shore crews are now turning their attention to the final preparations to the 1,940 nautical mile Leg 8 from Lisbon to Lorient, France, starting on Sunday.

At 1300 local, 1200 UTC, the yachts will head out into the North Atlantic where they will have to negotiate the temperamental Azores High, before rounding São Miguel Island and heading back towards the coast of Brittany. The fleet is expected to finish on or around June 17.

With the finish of the nine-months ocean race, just one month away, and just 23 points separating the top four teams, the race is set to go down to the wire. They have just two short legs and two inshore races remaining to pick up vital points, setting the stage for an intense and thrilling battle.

The hour-long in-port races score at 20 percent of that rate – six points for first, five for second and so on down to a single point for sixth.

yachte.com
Editorial Message
This site contains materials from other clearly stated media sources for the purpose of discussion stimulation and content enrichment among our members only.
whatsonsanya.com does not necessarily endorse their views or the accuracy of their content. For copyright infringement issues please contact editor@whatsonsanya.com