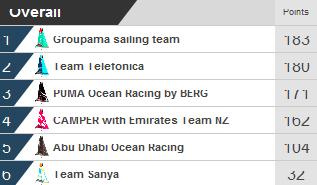 A four-way scrap for overall honours and a three-way tie in the inshore series are set to light up Saturday’s Oeiras In-Port Race in Lisbon (starting 1300 local, 1200 UTC) 24 hours before the teams set out on the penultimate offshore leg to Lorient.

In the secondary battle to be the top team over the in-port races, things are even closer, with Abu Dhabi, PUMA and CAMPER all tied on 30 points and Groupama just four points behind them.

Abu Dhabi Ocean Racing’s first place in Leg 7 came too late to put them in contention overall but three inshore wins mean they can still come away from the Volvo Ocean Race 2011-12 with a major prize.

Skipper Ian Walker said his team were preparing to push hard for a victory, while hoping the other teams would be too distracted by each other and the competition in the overall standings.

But Walker knows it is going to be hard racing with predicted westerly winds ranging from eight to 12 knots set to create a lightening windward-leeward course in the Tagus River.

"Fortunately racing will be around the turn of the tide so the current won’t be too strong,’’ Walker said. “It’s going to be very tight, very intense with boat handling, and that’s suited us in previous races.

"I’m hoping the other teams being so close on points will help us a little bit. I’m hoping they pay more attention to each other than to us.”

CAMPER with Emirates Team New Zealand skipper Chris Nicholson reckons Saturday could be as hotly contested as the PORTMIAMI In-Port Race where the lead changed at a furious rate.

"It’s potentially quite shifty and I think it’s going to make it wide open,’’ he said. “We saw in Miami it was tidal and shifty and it was one of the best races to watch so far as position changes and I think we’re going to see that again.”

PUMA Ocean Racing powered by BERG skipper Ken Read is just hoping that his team can continue their good form, which has seen them surge from a broken mast in Leg 1 to become a real race contender.

"It’s important that we just keep doing what we’re doing,’’ he said. “We’ve evolved to the point we’re at now due to thinking things through, hard work, effort. You’ve just got to keep doing what you do."

For Telefónica, the focus will be on changing what they do after unforced errors, including sailing the wrong course and hitting a buoy, contributed to them finishing last in the past three in-port races.

Skipper Iker Martínez said his team had put their failures behind them and were now focused on a return to the performances that helped them win the in-port races in Cape Town and Sanya.

"In sailing it is impossible not to make mistakes and especially in a race like this one with so much time racing and competing,” he said.

Groupama sailing team will be working hard to ensure they keep ahead of Telefónica on the inshore racetrack. Skipper Franck Cammas said there was plenty of pressure going into the race on a narrow course leaving no margin for error.

Meanwhile, Team Sanya will continue to hunt for their first podium finish.

"That’s one of our goals and now we’re starting to run out of options so we do need to turn the heat up a bit,” said skipper Mike Sanderson.

The Oeiras In-Port Race will start at 1300 local, 1200 UTC, ahead of the start of the Leg 8 race to Lorient, France at the same time on Sunday.