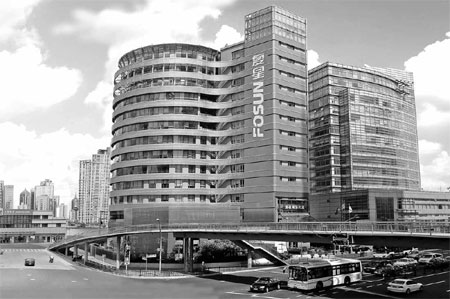 He seemingly fills every hour of the waking day with work.

The busiest time for Liang to send or reply to emails is between 1 and 2 am. At 6 am he is back online, sending or replying again.

If he takes a business trip abroad, he will attend the meeting straightaway rather than deal with jet lag.

He likes to read books about the different development stages of companies. Currently, he is reading books about insurance because he believes that to be a world-class investment group focusing on Chinese growth, insurance funds can play an important role.

Fosun set up a $600 million private equity fund with Pramerica Financial – a brand name used by US Prudential Financial Inc and its affiliates in select countries outside the United States.

"We have paid attention to developing our investment business since 2009 and have attached importance to managing PE (private equity) funds since 2011. We are positively seeking insurance funds for our future development," Liang told China Daily.

Fosun was founded in 1992 by four graduates of Shanghai’s Fudan University, including genetic engineering student Liang and philosophy student Guo Guangchang – now the chairman of Fosun. When Fosun International Ltd, the parent company of Fosun Group, was listed in 2007 in Hong Kong, its four key businesses were pharmaceuticals, property, steel and mining.

According to Liang, Fosun only had industrial businesses in 2007 and was regarded as an industry company with diversified businesses, so valuations of Fosun at that time were based on the market conditions of the property and steel sectors.

"Our performance in industrial businesses is good. Over the past seven years, our compound annual growth rate was 27 percent and year-on-year growth was 19 percent last year," said Liang, adding that the businesses in the four sectors have provided the company with steady profits and dividends. Furthermore, they contributed to building a foundation for Fosun’s investment business.

"An investor should be capable of using its industry capability to help the companies it invests in to develop their businesses. Buying in outside expertise is expensive," Liang said.

Fosun International’s 2011 performance report showed the company’s aggregate dividend and exit return on investment business (including the PE business) was 7.67 billion yuan in 2011. In 2010 it was 3.79 billion yuan and in 2009 it was 1.77 billion yuan.

"Because our strong investment capability can conduct more investments and we do not want to increase our debts, we turned to focus more on developing the PE business in 2011," said Liang.

By the end of 2011, Fosun had managed six PE funds totaling 13.3 billion yuan, of which 2.7 billion yuan came from Fosun itself. One fund of $100 million was in cooperation with Carlyle Group LP.

Shanghai Ganglian E-Commerce Co Ltd is an integrated IT service provider specializing in supplying steel information services, network technology and e-commerce services. Fosun invested 44 million yuan in the company in 2007 and held a stake of 52.9 percent because it considered industrial upgrading as one of the promising industries in the near future, according to Liang.

In addition to Pramerica Financial, Fosun also cooperated with domestic insurer Yong An Insurance by purchasing 18.3 percent of its shares. According to Liang, Fosun plans to use money from the insurer to carry out more investments in insurance businesses with steady returns and low costs.

"We seek global investment projects. They should have relations with the Chinese market and be able to benefit from the growth of China. Europe has many good opportunities. The most popular investment sector is consumption upgrading, followed by financial services, resources and industrial upgrading," said Liang.

China’s outbound direct investment came to $68 billion in 2010, up 20.4 percent year-on-year. That’s still small compared with the US at $329 billion, according to the United Nations, but more than five times its total five years earlier.

According to the Ministry of Commerce, the outbound direct investment of China is estimated to be $150 billion in 2015.

In 2010, Fosun bought a stake – now 10 percent – for 44 million euros ($55 million) in French resort operator Club Mediterranean SA, which has its eye on China’s growing domestic tourism market. In 2011, Fosun took a stake in Folli Follie Group SA, a high-end global retailer based in Greece, with an initial investment amount of 84.58 million euros.

According to Liang, Club Med and Folli Follie are leading companies in their specific sectors and their purchase prices were reasonable.

"Investment opportunities in travel are going to be huge. Now the Chinese are richer and it has become a trend to spend holidays abroad," Liang said, adding that daily spending ranging from 1,200 yuan to 2,200 yuan by each person at a Club Med resort is affordable to the Chinese and its Chinese language service was special.

"More Chinese are fond of one-stop and family traveling, so Club Med is a good choice," he said.

The World Tourism Organization estimates that the number of Chinese tourists going abroad will become the fourth-largest in the world by 2020 and the No 1 by 2035.

Liang said he asked two chefs to work in Club Med Yabuli, the first Club Med Chinese resort, in Heilongjiang province. Neither showed much interest at first. But when Liang asked them after they had lived there a while, they told him the resort was fantastic and did not want to return to Shanghai.

As a financial adviser for Fosun in the deal with Club Med, Andre Loesekrug-Pietri, chairman of European PE company A Capital, told China Daily that Liang is a very strong boss because he has a very clear direction during a deal.

According to Loesekrug-Pietri, there is a lot of money in Europe waiting to be invested, from rich families, corporations and equity investment funds. When there is a good opportunity, they will be prepared to pay, so the competition among investors is very fierce.

"The deal over Club Med took 82 days so you need to have a clear vision and the commitment of the partners to be in. Every day you need to push the deal. Every day there is a risk of misunderstanding and that something could destroy the deal," Loesekrug-Pietri said, adding that if an investor does not have a local project team that can push the deal on a daily basis, he will never achieve any results.

"I think the smartness of Liang in particular is to empower people and give them efficient flexibility so that the deal can be worked on on a daily basis. And he is then there to move it forward and take the decision to go ahead. I think this is something that you see more and more in Chinese entrepreneurs but it is not yet that common," Loesekrug-Pietri said.

Club Med made a profit of 2 million euros globally in 2011 and the number of Chinese visitors increased by 40 percent. In 2010 it suffered a loss of 14 million euros.

In August, Fosun will help Club Med open a new resort in Guilin, in the Guangxi Zhuang autonomous region, on the banks of the Lijiang River and nestling against more than 20 hills.

Liang said a third one will be opened on an island off Sanya, in Hainan province.

By 2015, five Club Med resorts will be built in China, making China its second-largest market in the world after France.

"We also seek opportunities in Japan. It is not far away from China and has many good tourist resources," said Liang, specifically recommending Hokkaido, a place with many tourism attractions for all seasons. Fosun is now under discussion with local travel services.

"Folli Follie’s concept of ‘affordable luxury’ is expected to be a perfect match with growing consumer demands in China. We will make good use of our local resources, such as retailing chains and advertisement and distribution networks, to help Folli Follie explore more business opportunities and reach more customers in China who can afford luxury products," Liang said.

"Because of our retail resources, we can negotiate with retailing groups rather than single retailers, so the expansion of Folli Follie was rather fast," Liang said.

By the end of 2011, Folli Follie owned more than 125 stores on the Chinese mainland, a year-on-year increase of 56 percent. The net profit of Folli Follie last year totaled 91.3 million euros globally, up 7.3 percent on 2010.