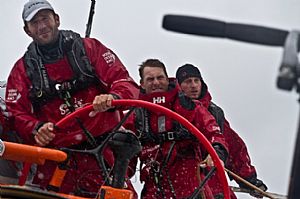 Mike Sanderson (at the helm of Sanya) is not giving up – Andres Sorianom, Sanya
The battle between Telefónica and Camper in fourth and fifth place of the Volvo Ocean Race’s Leg 7, came down to a slow-motion tussle over an excruciating final few miles, with no breeze and the current against them.

Telefónica eventually finished with an advantage of 1min 42sec, for a five-point boost that could yet prove crucial. Sanya was last over the line, but with her closest finish yet.

Sanya skipper Mike Sanderson heaped praise on his sailors and shore team for their incredible effort in Leg 7, missing out on fifth place by only 15 minutes – but he could not hide his frustration that no matter what they do, they lack the killer edge due to their second-generation boat.

"I’m incredibly proud of the boys — that’s the whole team, not just the sailors,” the New Zealander said, moments after docking in Lisbon in the early hours of Friday. “The boat was immaculate, the guys sailed it beautifully. We’ve got nothing left in the tank. We can do no more.

"We did a few pretty nice moves in this leg, but all it did was get us back in the fleet. Then eventually the fleet drags away from us. If only we could be a little bit faster so that we could be in the hunt more often…”

Sanya was a late entry into the Volvo Ocean Race, managers announcing their campaign four months before the race start in October 2011.

Sanderson, a race-winning skipper in 2005-06 with ABN Amro One, knew the boat was likely to be slower (Telefónica Blue from the last edition against five brand new ones) but still had hopes of causing some upsets.

Despite finishing in front of their rivals on a number of occasions in the in-port race series, Sanya has finished no higher than sixth in the offshore legs, despite crew pushing the boat to the absolute limit of its capabilities – and then some.

"We wrung the boat’s neck – there’s nothing left in the tank, I can assure you of that,” Sanderson told. "We’re sailing around at 110, 120 per cent of the speeds the boat is designed to do. She’s got nothing left.

"The boat was going really fast this leg. This team in a new boat would be in the hunt for overall victory for sure.”

Although there are just three in-port races and two offshore legs left, Sanderson said his team was still in with a chance of scoring a better finishing position than sixth – but that they would need a little luck to do so.

"When the music stops, we need to be the ones closest to the chair,” he said. “If the race goes on long enough, speed will always win. The fastest boat has always won the Volvo Ocean Race — speed is what you need.”

Despite only having four days to carry out any work needed, it was business as usual for the six shore teams on Friday as they set about preparing their boats for a return to battle.

With the leg now officially over, all attention has turned to the In-Port Race, with all shore crews rushing to clean up and make repairs under the pressure of time. The action resumes with the In-Port Race eight days away on June 9, followed by the start of Leg 8 to Lorient the following day.