Groupama surged back into contention on Leg 7 of the Volvo Ocean Race on Tuesday, joining a fast-moving pack of teams threatening to make it a tight finish for leaders Abu Dhabi.

The Emirati team skippered by Ian Walker have managed to keep their lead over second-placed PUMA steady at around 30 nautical miles since 0100 UTC on Tuesday.

They have also been at pains to preserve a war chest of energy in anticipation of a frantic finish once the teams have entered a zone of light winds lying in wait outside Lisbon.

With less than 1,000 nm remaining Abu Dhabi Ocean Racing have remained coolheaded at the front in consistent southwest winds averaging speeds in excess of 20 knots, notching more than 480 miles in the past 24 hours.

It has not all been smooth sailing for the longstanding leg leaders, however. They lost around 60 nm before stemming the tide, allowing PUMA Ocean Racing powered by BERG to close to within 29 nm at 0100 UTC. 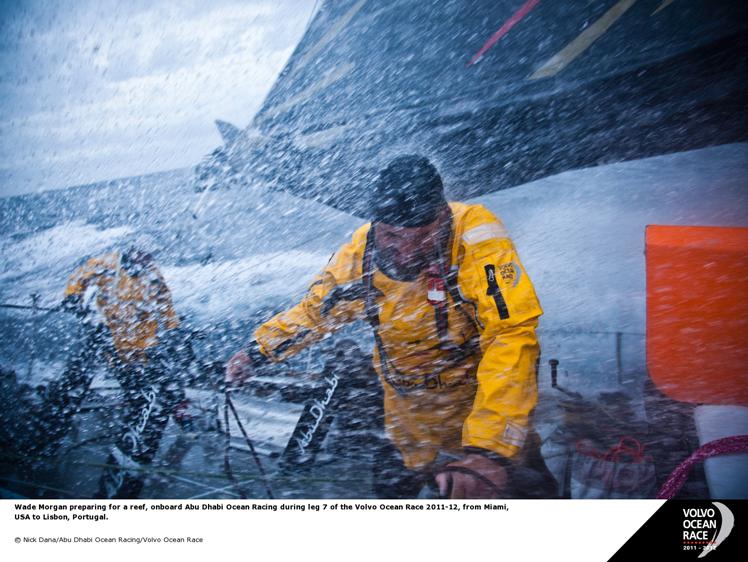 Groupama sailing team have been the biggest movers, improving from fifth to third to take a prominent position in a new power pack in the southwest, along with CAMPER with Emirates Team New Zealand and Team Telefónica.

Groupama navigator Jean-Luc Nélias said his team were hopeful that they could continue to ride the low and make gains all the way to the ridge.

"We are surfing ahead of this front in 20 to 25 knots of southwest winds,” Nélias said. "The danger is the front could overtake us and the winds behind the front are lighter and less stable.

"For the moment we are pushing hard, we keep changing sails to sail at the maximum speed. We’re lucky because the sea state is good. The boats are sailing well

"We have 24 hours left in these conditions before to enter the high pressure ridge off the Portuguese coast. Once in the ridge it will be a different game."

Having successfully fended off attacks overnight Abu Dhabi skipper Ian Walker said his team were now focusing on preparing for the next serious engagement — the massive ridge lying about 100 miles off Lisbon’s coast.

With relatively flat seas and decent winds Walker said there were few sail changes, which meant he could rest his men ahead of what would be an around the clock effort to protect their hard fought lead in the final day’s sailing to the finish.

"We are approaching 1,000 miles to go and our plan is to rest people up while the going is easy so that we have fully charged batteries for what will certainly be a frantic last 36 hours,” Walker said.

"If that means everyone on deck then so be it – there will be time to rest in Lisbon."

Volvo meteorologist Gonzalo Infante said he expected the fleet to reach the 200 mile wide ridge at about 1200 UTC on Wednesday. It should take the teams between 12 and 15 hours to cross it, before they reach the Portuguese trades.

"The ridge will be very difficult to navigate, with plenty of light and variable winds,” Infante said. "Whoever can best navigate it and reach the Portuguese trades first will gain a major boost that will see them stretch from the fleet a lot."

Despite dropping to sixth place overnight Team Sanya’s skipper Mike Sanderson has had plenty to celebrate, marking his 41st birthday with a candle-topped Snickers chocolate bar and a verse of Happy Birthday from his two children.

"Where would you rather be for your birthday than out on a Volvo Open 70 with a bunch of your mates doing 25 knots,” Sanderson asked.

At 1300 UTC Abu Dhabi were leading by 32 nm over PUMA, followed by Groupama, CAMPER, Telefónica and Sanya, 70 nm behind.

Four of those teams are in contention for the overall prize, with Telefónica guarding a seven-point lead over second-placed Groupama, and CAMPER and PUMA poised respectively 13 and 14 points off the pace.

The latest ETA for the first boat in Lisbon is about 1800 UTC on Thursday. 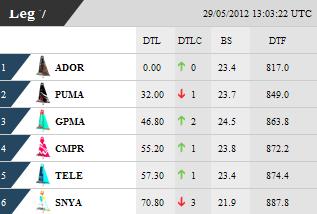 Next news: Property sales doubled in Haikou, compared to May 2011