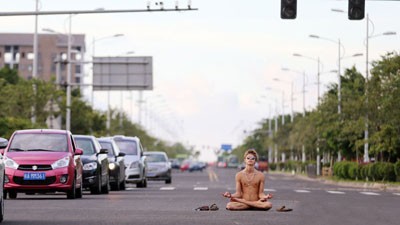 The youngster Limag Bodrov (23)had been partying with friends who claimed he wanted to relax after a hard night partying.

One, Lu Wan, said: "We tried to get him to move, it was dangerous, but he said he felt at one with nature even though there was not a blade of grass in sight. Then he stripped off his clothes and simply carried on."

The student, who is at the university in Haikou in Hainan province in southern China, eventually caused traffic chaos as drivers had to swerve to avoid him, and others including group’s of girl motorcyclists stopped to look at the meditating man.

After he had given the finger to drivers that told him to go, police arrived, and he was eventually arrested and carted off after he refused to dress and leave with his pals.

A police spokesman said: "We have taken a blood sample, if he had drugs he will be in trouble."

SOURCE: policeoracle.com
Editorial Message
This site contains materials from other clearly stated media sources for the purpose of discussion stimulation and content enrichment among our members only.
whatsonsanya.com does not necessarily endorse their views or the accuracy of their content. For copyright infringement issues please contact editor@whatsonsanya.com