Updated: 2012-05-28 02:17:29
‘Ryan Houston and David Swete onboard Team Sanya during leg 7 of the Volvo Ocean Race 2011-12, from Miami, USA to Lisbon, Portugal.’ Andres Soriano/Team Sanya/Volvo Ocean Race
Team Sanya made a break from the fleet overnight heading north towards the ice exclusion zone in search of wind as Abu Dhabi led the fleet into the final 1,800 nautical miles of Leg 7.

Putting the positions in from the latest sked into the routing function of Predictwind.com, Team Sanya had definitely moved into a position within the lead group, and could improve further.

At 0900UTC on May 27, 2012 Sanya is saliling north, with the rest of the fleet heading north east, with the Ice Zone approximately on the line on Prince Edward Island – PredictWind.com 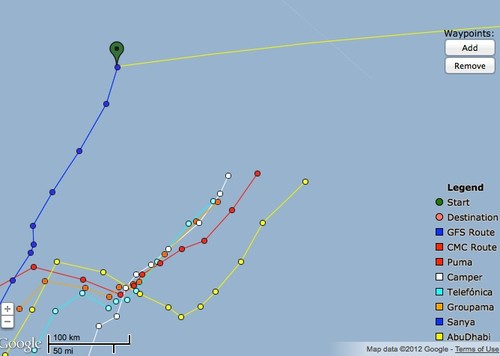 At 0900UTC, the fleet positions have straightened, as all boats head north – Volvo Ocean race May 27, 2012 – PredictWind.com 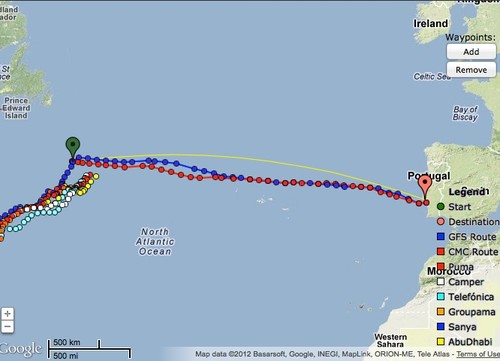 Using the snap-shot of fleet positions used by Volvo Ocean Race to call the race lead, Team Sanya is shown as being furthest from the race finish on the great circle radius system, however that method does not take into account the track to the finish, and the weather predicted to be experienced on the optimised route used by Predictwind, which also give a projected finish time for each yacht.

None of the boats are sailing directly at Lisbon, and that creates further error in the VOR method which will always favour the easternmost boat, while the fleet sail at right angles to the finish line.

The situation in which Sanya is now placed is reminiscent of the first week of Leg 4 when Puma Ocean Racing pulled back almost a 300nm deficit in two days. The key then, and now, being whether Team Sanya can convert her northerly positon and potentially better route to cross ahead of the fleet on their run into Lisbon.

Earlier Volvo Ocean Race reported that Team Sanya was about 140 miles north-west of leg leaders Abu Dhabi Ocean Racing at 0700 UTC, and the sixth-placed (using the VOR method) Sanya decided to try something different in the race to hook into the strong westerly winds lying ahead that will propel the fleet towards Lisbon.

‘Although we have more miles to sail, and it probably looks like quite a bit on the tracker, our navigator and skipper, Aksel (Magdahl) and Mike (Sanderson) have a plan and only time will tell,’ Sanya’s media crewmember Andrés Soriano said.

Ian Walker’s team were also the fastest in the fleet averaging 13.5 knots, more than four knots faster than any other crew,

As the on-the-water game of snakes and ladders continued, Camper media crew member Hamish Hooper said he was praying for the arrival of wind to set his team back on the fast road to the Leg 7 finish as they saw their speeds drop to five knots.

‘It has been like one of those dreams you have when you are running as hard and fast as you can after something, but it’s like running in mud,’ he said.

‘The only hard and fast running we want to be doing is direct towards Lisbon with plenty of downwind speed.

‘Apparently it is coming, once this big ‘H’ moves over us and a big ‘L’ comes down with plenty of wind.’

At 0700 fourth-placed Groupama trailed the leaders by 60 miles, with Telefónica a further three miles behind them.

Next news: Everbright to sell Qingzhou Bridge in Fuzhou that connects Shenyang to Haikou