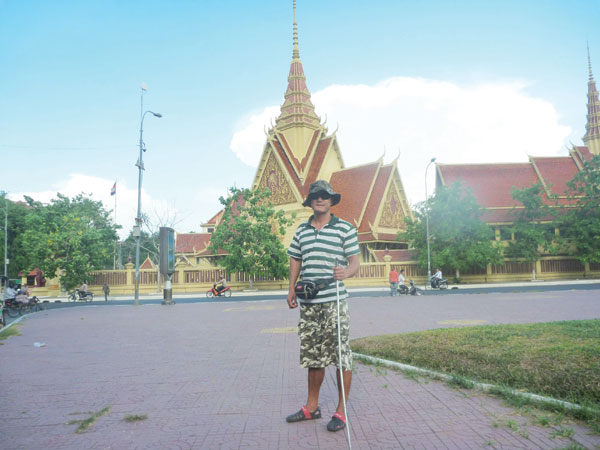 Cao Shengkang poses in front of a temple during his recent tour of Laos, Thailand, Cambodia and Vietnam. Provided to China Daily 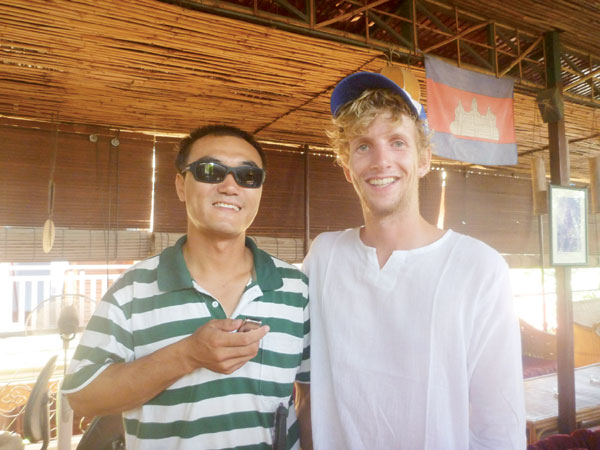 Cao Shengkang met many warmhearted people, who helped him with daily needs during his trip.
Cao Shengkang is perhaps China’s first blind backpacker to have traveled abroad alone.

The 35-year-old, always seen with his sunglasses and walking stick, has just completed his 19-day tour of Laos, Thailand, Cambodia and Vietnam.

"Although I can’t see, I am able to visualize the beautiful sceneries based on the descriptions of others around me. I’m also able to enjoy the food and drinks. I really had fun," says Cao, who lost his eyesight in a car accident when he was 8.

Like many blind people in China, Cao learned massage to make a living. The Anhui province native moved to Beijing in 2001. Within six years, he opened his own massage stores, earning a monthly income of nearly 10,000 yuan ($1,580).

Despite the handsome returns, Cao shut down his massage stores in Beijing in 2011 for the love of traveling and went to Sanya, Hainan province, to learn how to sail. He had hoped to sail around the world. But the travel enthusiast had to give up the idea because of his visual disability, and after finding out how expensive and unrealistic it is for him.

"I was easily hurt because I couldn’t see. I decided to explore do-it-yourself tourism, because it’s cheaper and I have more freedom," he says. He decided to tour the few Southeast Asian countries first because of their proximity to China and the lower cost. He spent about 4,000 yuan on his tour.

But it wasn’t all smooth. Cao initially had a traveling partner, but they parted ways because of disagreements.

Some of the difficulties faced during his sojourn were totally unexpected. For example, checking in and out of hotels, buying food, getting a visa and taking public transport.

"The key is to be brave and just ask people," he says.

He remembered the first time he had to buy food on his own. With no one to ask, Cao used his sense of smell to find a food stall. When he was asked to pay, he handed the vendor banknotes without knowing the amounts printed on the bills.

Language was another major barrier. He only spoke Chinese and knew only a few English words, so he had to use body language, which resulted in some hilarious incidents. He shared that there were a few occasions when he had to unbuckle his pants to signal that he was looking for a restroom!

Among the English words he used the most during his travels are "blind" and "China". He hoped someone who speaks Chinese would come to his aid. And, whenever he heard anyone speaking Chinese on the street, he would initiate conversation with that person.

He met some good Samaritans on the way. In Chiang Mai, Thailand, he got acquainted with a group of Chinese tourists, who brought him to a supermarket and treated him to dinner.

When he left for Bangkok, they gave him the phone number of a Thai woman who spoke Chinese, so that he could call if he needed translation.

He also met another kind soul, a Thai backpacker, who sent him to a bus station, bought him a ticket and some food. "The man touched my eyes, gave me a hug and said ‘God will protect you’. I was touched by his kindness," Cao recalls.

In Cambodia, he met a Belgian man in a youth hostel who spoke Chinese. The warmhearted man not only helped Cao with his daily needs but also accompanied him around the city. He also gave Cao some English notes, such as "help me to book a room" and "help me to go back to China", so that Cao could show these to others when necessary.

"I want to express my gratitude to those who helped me throughout my journey. Although I don’t know their names or speak their languages, they held my hand and took me to bus stations, toilets, restaurants and hotels," he says.

Cao is currently looking for a job to save enough money to travel to places with more Chinese, such as Singapore and Malaysia.