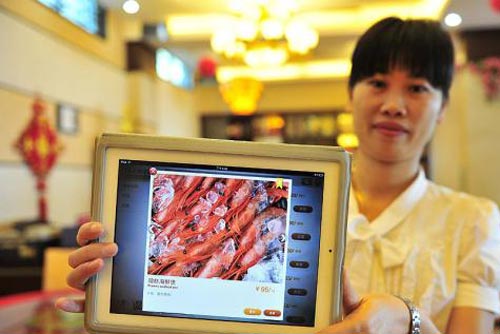 Seafood restaurants in the tropical resort city of Sanya are now required by the local government to use iPads to put in customers' food orders to avoid overcharging.

The government plans to use the new iPad ordering system to monitor restaurant pricing of seafood, which is often expensive and variable.

The change comes months after a price gouging scandal during the Spring Festival triggered public outrage. Some restaurants in Sanya, a popular tourist destination especially during the Chinese New Year's holiday, were accused of overcharging tourists for seafood dishes.

Sanya, a coastal city in the tropical island province of Hainan, is visited by tens of thousands of domestic and foreign tourists each year.

Under the new system, customers will read the menu and place their own orders on iPads. Their orders will then be sent directly to the kitchen via WiFi. The new system will also allow officials to monitor sales information, said Wan Qiongyun, spokesman for the Sanya Administration for Industry and Commerce.

The new ordering system is easier to monitor, said Wan, adding that consumers can also see what they have ordered, including the price of each item.

Among more than 200 seafood restaurants in Sanya, over 20 have already implemented the electronic ordering system.

"It's so fashionable to use an iPad to order dishes. I think it should be promoted," said Zhang Hui, a tourist in Sanya.

"I don't think the new system can eliminate the overcharging phenomenon. Especially for older people, most of them cannot use an iPad. I believe the traditional way is better for them," said Li Xiaoping.

The new program is part of a broader government effort to restore confidence among tourists. Other measures the city has adopted include integrity education, daily inspections and publicizing certain information about restaurants.

Previous news: Benetti FB255 superyacht sold at Hainan Rendez-Vous to be delivered in 2014