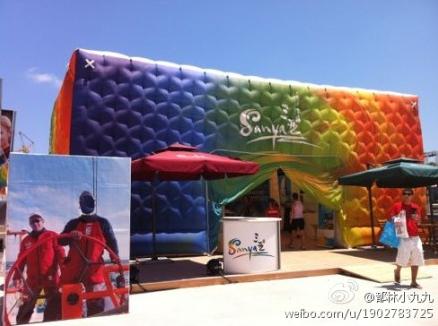 The Sanya Pavilion at the Miami Race Village
Sanya, the tropical tourist city in China’s Hainan province, is going to be far more famous around the world thanks to the Sanya Pavilion, which is exhibiting the city’s beauty at the Miami Stopover of the Volvo Ocean Race 2011-12.

"What a beautiful city! Where is it? It’s like Abu Dhabi just popping out in front of us,” said a local resident in Miami, America.

The Sanya Pavilion is definitely the most popular pavilion at the Miami Race Village. Floods of local residents and tourists have been fascinated by the huge photos and trailers of Sanya’s scenery.

According to a “micro-survey” by a Chinese journalist, 7 among 18 local residents and tourists had never heard of the city of Sanya, and most of them had no idea which area the city is located in China. And despite several having heard of it, only 1 interviewee had been to Sanya.

However, many interviewees gave the thumbs up to the city after they had seen the tourism materials, photos and trailers about Sanya.

"Sanya has so many international branded hotels, golf courses, and hot springs. I love playing golf, and my wife love hot springs. We will go to see it if have the chance,” a local resident said.

Only one resident surveyed had been to Sanya, he was a businessman and went to Sanya last year for a large-scale project. He said, "Sanya has the opportunity to become a top-level coastal holiday city, but still has a large need to enhance its software facilities. For example, Miami is a paradise resort for North Americans. It has high-quality hardware facilities and provides perfect software maintenance.”

The Sanya tourism promotion delegation, which is launching a series of activities in Miami Race Village with the crews of Team Sanya, vowed to strengthen the promotion on the international market with the help of the Volvo Ocean Race.

The Volvo Ocean Race is an exceptional test of sailing prowess and human endeavour which has been built on the spirit of great seafarers. The race began in Alicante, Spain on October 29 and has visited Cape Town, Abu Dhabi, Sanya, Auckland, Itajaí, and Miami.