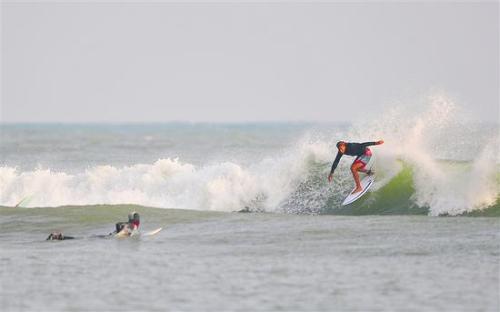 All the action of the Hainan Wanning Riyue Bay International Surfing Festival Presented by Quiksilver which took place from January 7 to 14, 2012 will be broadcasted on Time Warner Cable Hawaii and Time Warner Cable Los Angeles, San Diego and Desert Cities.

The festival, which included the ISA China Cup and Hainan Classic, was the largest surfing competition to ever take place on the shores of China. The ISA China Cup feature the world's top eight surfing nations battling for the Gold Medal in a team competition. The Hainan Classic was a 4-Star ASP event with a $95,000 purse, which featured some of the top pro surfers in the world, including Cristobal de Col, Nathaniel Curran, Gabe Kling and Marc Lacomare.

The Hainan Classic was run in spectacular 4- to 6-foot waves at the left-breaking wave at Riyue Bay, and was won by Ireland's Glenn Hall.

The event will mark a before and after in the surfing history of China and the world, as the surf community was introduced to perfect waves, friendly people and a the potential of a blossoming new surf culture.

The schedule for replay of the Festival:

Next news: Sanya, no longer an ancient secret – Sanya tourism delegation in Miami