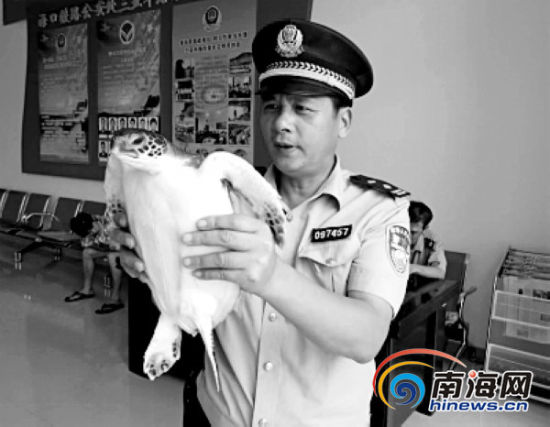 The 26 year old Hunan tourist, surnamed Liu, came to Sanya with his girlfriend on 17th May. According to Liu, he captured the hawksbill turtle unexpectedly when he was swimming in Sanya Bay on 20th May. He brought it back and raised it in a plastic bucket, planning to take it back to Hunan.

Liu carried the plastic bucket to Sanya Railway Station with his girlfriend on 21st May. However, when he tried to get through the security checkpoint, he was detained by the security staff and handed over to the police soon after.

According to an officer of Sanya Fishery Department, the hawksbill turtle Liu caught, which is 40 centimeters in length and 2.5 kg in weight, is under the nation’s second-class protection. Liu’s behavior has violated the law and should be punished in principle.

Liu claimed that he caught the turtle without knowing that it was a protected animal, and felt remorse for his ignorant behavior. Considering Liu’s ignorance and his humble attitude, the officer of Fishery Department discharged Liu after asking him to write a guarantee.

The officer said they would release the Hawksbill Turtle to the sea after recovers its strength fully.