VOR Leg 7 kicks off in Miami, crossing Atlantic to Lisbon 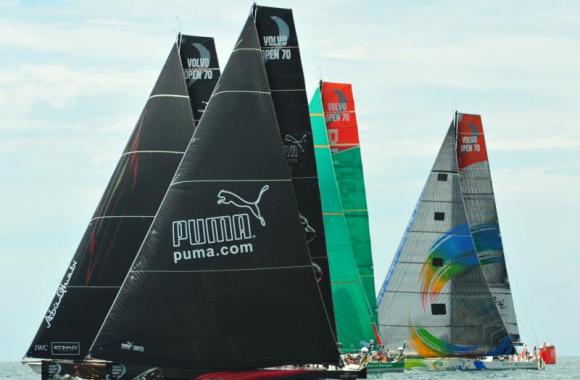 The Volvo Open 70 yachts are capable of more than 600 miles a day and speeds more than 30 knots. A spectator fleet gathered to watch the excitement, but, the breeze was light and the yachts sailed at speeds that were not particularly thrilling. However, the racing was still tactically interesting.

The start was not a traditional upwind start and the yachts crossed the line under code zero sails (sails used in light air when close to the wind), on a fetch to the first mark. Abu Dhabi lead the start line and rounded the first buoy followed by Telefonica, Groupama, Camper, Sanya, then Puma. On the next leg, Puma passed Sanya before the next mark rounding and the yachts sailed northerly, upwind.

Abu Dhabi headed straight out for the gulf stream where currents run north and the yachts behind tacked sooner, but she gained a huge lead over the fleet as there was more apparent wind speed and more tide pushing her in the right direction. However, after the next mark rounding, the small breeze had decreased and the fleet caught her up once again. Some of the yachts hoisted a crewmember up the rigs to the top spreader to look for breeze and report to the tacticians to plot a course to find the small wind lines.

Having successfully held off Groupama, who had claimed second spot earlier as they approached the last mark rounding in Miami, Abu Dhabi headed once more into the gulf stream as the lead boat. Groupamma was hot on her heels, and Telefonica and Camper tacking sooner but looking good the lead was not guaranteed by any means. Puma and Sanya were trailing further behind.

The guest crewmembers who sailed aboard some of the yachts took this opportunity to jump off the back of the yachts and have the team motor boats pick them up out of the sea before the yachts headed of to the horizon.

With the finish line in Lisbon, the yachts will be utilizing the gulf stream on a course that will take them north, past New York, before they will traditionally consider turning east. With more favourable current, more wind and by following great circle routes, this has been the general track of many yachts over the years. However, the yachts will be sailing directly toward tropical storm Alberto, the first of the 2012 hurricane season, lying off the east coast of the United States and holding winds of up to 45 knots at its centre.

With this in mind the navigators may decide not to follow traditional routes and follow the storm if the yachts can keep up. Get the wrong side of the low and they will be becalmed.

The results for this leg are going to be critical for the top four yachts as they are all in contention of winning the Volvo Ocean Race overall. With the leader board having four yachts within 14 pts of one another they will all need put in a winning performance.

Abu Dhabi looks fast in light winds, Groupama looks fast in a variety of conditions, as does Telefonica. Puma has shown she has been speeding up through the ocean race and Camper has also been consistent. So, this leg is wide open and maybe the advantage will go to those who play tropical storm Alberto to their best advantage and who can keep the yacht performing without breakages over the 3,600 mile leg.