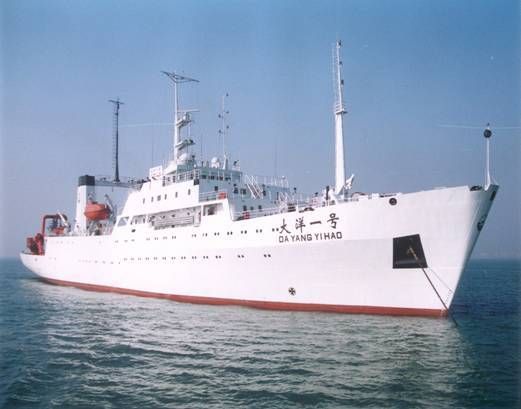 Dayang Yihao
The scientific research vessel Dayang Yihao started an oceanic expedition from China to sail from the city of Sanya on Hainan island province, for a mission of 370 days.

Tao Chunhui, chief of staff of experts on board, said the work will focus on the study of polymetallic sulfides, biorrecursos and the environment, according to information coming from the aforementioned island.

The Dayang Yihao, whose route includes the Atlantic and Indian Oceans, takes advanced scientific instruments, among them an remotely operated underwater vehicle.

The ship will anchor in Cyprus, Nigeria, Brazil, South Africa and in Mauritius to stock up before its planned return to the coastal city of Qingdao in northeast China, on May 2, 2013.

On December 11, 2011, the Dayang Yihao completed a mission of scientific research of 369 days, which covered more than 64 thousand nautical miles.

During this voyage, the ship crossed the Pacific, Atlantic and Indian Oceans, and included stops in Brazil, Panama and Ecuador.

Experts held studies at that time on metal sulfides and nodules, the marine environment, genes and biological marine biodiversity, with encouraging results, they reported.

SOURCE: english.pravda.ru
Editorial Message
This site contains materials from other clearly stated media sources for the purpose of discussion stimulation and content enrichment among our members only.
whatsonsanya.com does not necessarily endorse their views or the accuracy of their content. For copyright infringement issues please contact editor@whatsonsanya.com