HomeNews & Social MediaSanya NewsPortMiami In-Port Race to start on May 19, every point counts for VOR top 4

PortMiami In-Port Race to start on May 19, every point counts for VOR top 4 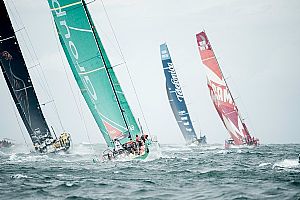 The teams will be vying for valuable inport racing points – Paul Todd, VOR pic
A spread of just 17 points between leader Telefónica, Groupama, Camper and Puma means every point is critical to the final podium places of the race, raising the prospect of the competition becoming ever fiercer when racing resumes with the PortMiami In-Port Race on May 19 and the start of Leg 7 across the Atlantic to Portugal the following day.

There are just three offshore legs and four in-port scoring opportunities to go in the Volvo Ocean Race 2011-12, and while Team Telefónica has an 11-point lead over Groupama sailing team at the top, there is no doubt about the current form team.

In a close fought battle from Brazil to Miami on Leg 6, fourth-placed Puma clocked up a second consecutive leg win to close to within just two points of Camper with Emirates Team New Zealand in third.

Puma’s crew resisted relentless pressure from the chasing pack — giving them another surge in confidence, while confirming that they have fully recovered from the broken mast that cost them points on the first leg.

"Not finishing a leg I think put us in the afterthought category, but I don’t think we’re there now. We are where we always expected to be: on the podium often enough to score enough points to win the overall race,” Read said.

"We could be the dark horses here. We could push from behind and we can push from ahead and we could make life hard for other boats. They know we’re here right now, I can guarantee that.”

With just days to regroup in Brazil after taking a month to complete Leg 5 after damaging their boast on the Southern Ocean leg, Camper’s crew turned in a composed performance on the way to Miami, pushing the leader the hardest, proving they are capable of matching all their main competitors for speed and smarts.

Their impressive return to form is a testament to the sheer grit and determination of Australian Chris Nicholson’s team and to their commitment to grind out an overall race win — despite being the only top-four team yet to win a leg.

Despite Telefónica’s domination of the first three legs, Nicholson believes the race is now wide open. "They had an amazing run early on in conditions that were right up their alley,” he said.

Nicholson said the Camper crew were looking forward to the forthcoming transatlantic leg where he expected to be able to make the most of “some good hard running where the boats and crew will be tested to the max once again.

"We stumbled in those conditions during Leg 5 — I don’t think you will see us stumble again,” Nicholson added.

Franck Cammas’ Groupama trailed the fleet for the first week of Leg 6, prompting questions about the replacement spar they had been forced to use after being dismasted while leading in the last 1,000 nautical miles of Leg 5 to Itajaí.

However, the French crew´s never-say-die attitude was eventually rewarded when the leaders stalled at the top of the Caribbean, wiping out Groupama’s more than 100nm deficit and leapfrogging them past Telefónica into third.

"The overall victory is possible for us, yes, but also for Puma, Camper, and of course Telefónica,” Cammas said.

"Everything is possible. We’ll have to sail better than we did on the last leg. We need to remember the good things we did and do them again.”

While Telefónica arguably has the fewest positives to take from Leg 6, skipper Iker Martínez’s team still have a healthy lead at the top and have proved time and again their ability to come back from adversity.

Telefónica has a mixed short course record so far this race, winning two out of the six in-port races, but finishing last in the others. Martínez said his crew knew they would need to be on top of their game on Saturday to get a good result to set them up for Leg 7 to Portugal the following day.

"We’re in a situation everyone else would love to be in," he said. "Still leading, with a good team and boat. We have a good chance."

Having each previously missed out on points-scoring opportunities due to damage earlier in the race, fifth placed Abu Dhabi Ocean Racing and sixth placed Team Sanya have had to accept that an overall podium result in is now beyond them.

Abu Dhabi and her crew have performed well in the inshore races so far — winning comfortably in Alicante and in their home port — and they are determined to return to the podium.

"The in-port races tend to be less about boat speed and more about starting, tactics and boat handling,” said Abu Dhabi skipper Ian Walker. “Generally we have been pretty good at that so far so we are hoping for a decent result.”

Walker has a track record of success in the US, having claimed his first Olympic silver medal in Atlanta, Georgia, during the 1996 Games, and says Miami has also brought him good fortune over the years.

"Miami is my lucky venue,” Walker confirmed. “I have won quite a lot of events here and I am always pleased to race in Miami.”

Team Sanya skipper, Mike Sanderson, said the Chinese crew were excited to be back in the race after 50 days away from the action. Their boat was shipped from New Zealand to Savannah to repair serious damage sustained while they were leading the fleet in the Southern Ocean on Leg 5.

"I’m quite eager to get back to the race mode,” Sanderson said. “It feels good to steer the boat after another big repair on her. The trip from Savannah down to Miami saw perfect sailing conditions and we sailed Sanya Lan in over 20 knots. We can’t wait to line up against the other boats again. We’re ready."