Updated: 2012-04-11 14:53:24
Groupama completed a heroic recovery to claim third place in Leg 5 of the Volvo Ocean Race on Tuesday, limping across the finish line in Itajaí with a jury-rigged mast for 20 points that revive their hopes of overall victory. 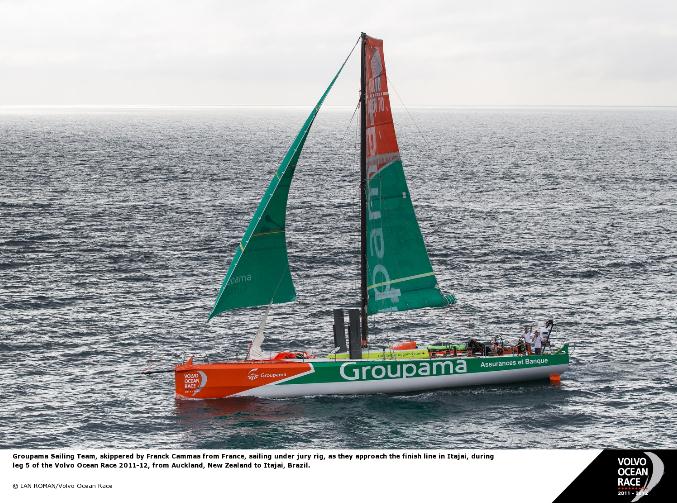 Just six days ago Franck Cammas’ crew were questioning what they had done to deserve their ill fortune after a broken mast ended dreams of a second consecutive leg win.

Cammas’ crew opted to put into Punta del Este in Uruguay where they strung together an ingenious makeshift rig which they nursed all the way to the finish.

Victory in the 6,700 nautical mile leg from Auckland to Itajaí would have seen the French team move within touching distance of overall leaders Team Telefónica.

As it is, third place — behind winners PUMA Ocean Racing powered by BERG and second-placed Telefónica — was enough to take them back up to second overall, within 20 points of the lead.

"At the time all our focus was on winning the race and when the mast broke we had to change our strategy pretty quick," Cammas said.

"The guys all did a fantastic job and I am very happy with our podium place. The mood among the guys is very good and we’re still right in this race." 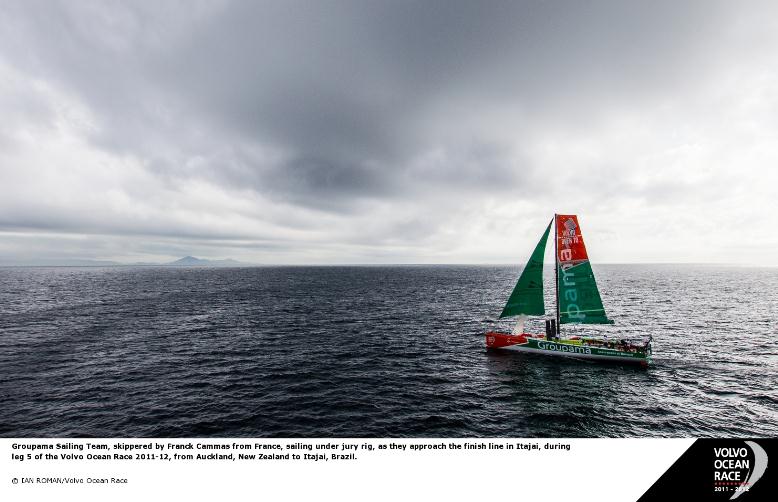 After leading the fleet through much of the Southern Ocean, Groupama were also the first round Cape Horn, the southern tip of South America.

They appeared to be winning their duel with PUMA through the South Atlantic when disaster struck.

They suspended racing at 1542 UTC on April 4 after their mast snapped in two, just level with the first set of spreaders, around 10 metres above the deck.

The sailors were able to recover most of the rig and made for the Uruguayan city of Punta del Este, around 60 miles from where the incident happened.

A round-the-clock repair effort saw a makeshift rig fashioned from the bigger of the two broken parts of the mast in just three days.

The team resumed racing at 0500 UTC on April 7 with seven crew on board including bowman Brad Marsh, who had five staples put into his wrist after accidentally plunging a knife into it while cutting away the mainsail from the broken mast.

"I’m responsible for the rigging and I didn’t want to leave the guys to have to deal with that on their own," New Zealander Marsh said. "Now I’m really pleased to have completed the leg."

Groupama now have 127 points overall after crossing the finish line at 1358 UTC on Tuesday, completing the leg in 23 days, 12 hours, 58 minutes and 45 seconds.

CAMPER with Emirates Team New Zealand are on course to finish Leg 5 in fourth place and should climb back up to third with 119 points.

Abu Dhabi Ocean Racing, who like CAMPER were forced to stop at Puerto Montt in Chile after suffering structural damage, were unable to complete the leg. They left the port by ship on Tuesday and should arrive in Itajaí in time for the in-port race on April 21.

Team Sanya were also forced to retire from the leg and will rejoin the leg in Miami. 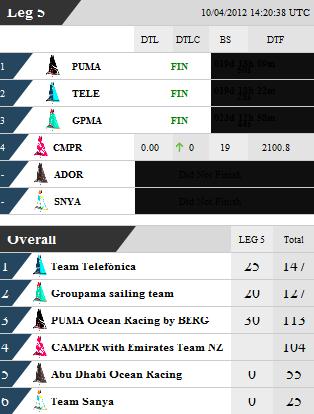 Next news: A grand ceremony to worship Mazu held in Haikou Xiuying