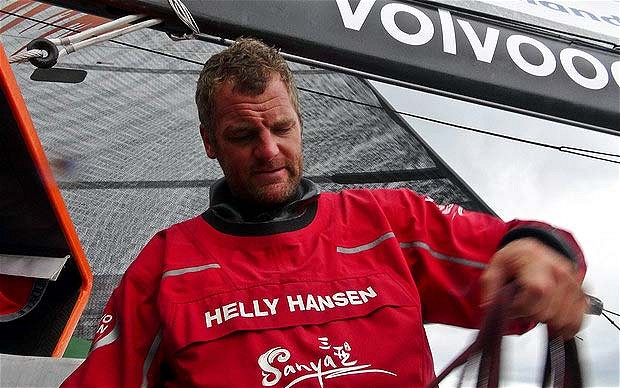 On watch: Richard Mason, Team Sanya’s watch captain Photo: VOLVO OCEAN RACE
We are in a four hours on-four hours off watch system and I start with the 0400-0800 watch every day – it’s called the graveyard shift though I get to see the sun come up every day.

You have to find a way of NOT falling asleep on Volvo Ocean Race watch especially if you are the watch captain. You get up half an hour before you start. The bunks on Sanya are side by side so I sleep on the inside bunk, which is made of mesh and aluminium and 6’ long and 3’ wide.

You wedge yourself in against the hull so you don’t fall out – though when the boat de-accelerates suddenly you can fly out the end of your bunk on the top of the guy in front of you. In the Southern Ocean, that will happen once or twice a night.

We sleep in a Goretex sleeping bag with layered fleece linings. We hot bunk so I share my bag with the other watch captain and there are plenty of rules about keeping the bags clean. Hygiene on the boats is very important. They don’t smell too bad – actually they probably stink but we don’t just realise.

In the tropics, it gets pretty bad – in the last leg, the guy sleeping on top of me was sweating so much in his sleep, it was dripping down on top of me. I had to get up and sleep somewhere else.

Normally we just wear shorts and T-shirts at night but as the conditions get colder we have a base layer system – a next-to-skin layer, a thermal layer and a heavier thermal layer with the wet weather gear on top.

That’s called wet bunking – when we are on stand by, a bit like the fire men. We take the sleeping bags out of the bunks then get in the bunk with all our gear, including our boots just in case you have to get back on deck in a hurry.

In the Southern Ocean in the last race, I didn’t take my gear off for days. You tend not to sleep very well but you are often so tired you could drop off anywhere.

We sleep in wet clothes 50 per cent of the time. You never get used to it but learn to live with it. Sometimes my mind wanders to the thought of my wife and kids tucked up under a big thick duvet at home.

You get up, grab a coffee and head to the nav station and have a conversation with the navigator or skipper about what weather to expect in the next four hours and how we are going against the rest of the fleet. I get my flight instructions – what they want me to do with the boat over the next four hours. Headings to steer, courses, sail performance modes, that sort of thing.

I go on deck, probably ten minutes early and talk to the other watch captain. He will tell me what he has seen and what he sees coming and I will slowly take over the running of the deck.

After I’ve been on deck for half an hour, I’ll take the helm for two or three hours – we change helms every two hours. We have four major performance helmsman on the boat and we are expected to steer 90% of the time.

Steering is the most enjoyable job on the boat. It can be amazing when we get these starry nights and you see things that no one else has ever seen – there are fewer people who have sailed round Cape Horn than have climbed Mount Everest.

Night skies and the realms of sea life are amazing – seeing humpback whales coming up to see if there is any meat on the boat or seeing killer whales surfing in your wake in the Southern Ocean is pretty neat though a bit scary. I have spent quite a lot of time being terrified.

Anyone who tells you they don’t get scared on these boats is lying through their teeth. There are plenty of times when these boats get completely out of control and that can be really scary.

Keeping control is really difficult. It’s a fine and extremely fine knife edge and it is really easy to fall off one way or the other and you have to be very careful not to fall off. It could cost lives.

As watch captain we set the tone of the mood. If you are pissed off and grumpy, everyone else will be too. If you are telling everyone they are doing a good job, they will hopefully do a better job.

It’s important to pick the moods and understand them. You get to know the guys better than you know your own wife – you get to see them at their best and their absolute worse in extreme environments, so it’s extremely important you see it coming and help them out of it.

The time goes very quickly when you are racing. The day gets split up into four hour lots. Sail changes can take half an hour and they often happen on the watch change so if you do it before the end of your watch, it can take a couple of hours to actually get in your bunk which will mean just an hour of sleep. If we break something, it has to be fixed and you stay there until it is fixed.

Everybody helps to change a sail regardless of whether they are on or off watch – you can go for days without changing sail but sometimes you can do five sail changes in a watch, almost every hour.

Once you go off watch, there will hopefully be a meal waiting. It’s all freeze-dried food – no fresh food -so you will take you breakfast, lunch or dinner. Breakfast is muesli or porridge.

Lunch and dinner are chilli con carne, or lasagne or roast beef. The meals are available at 0600, 1200 and 2100 so when I come off watch at 8am, breakfast is two hours old and kept semi-warm in a big stainless steel pot.

It’s pretty terrible and we eat in a stainless steel dog bowl with a spoon. There are five dogbowls, five spoons and five coffee cups. We share everything.

You can get in a firefight at any time so you get in your bunk whenever you can. Then back on deck just before 12 with the same routine with hopefully something different to eat. 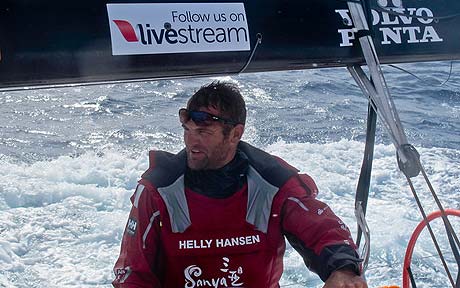 If it rains, we will rip up on deck with some shampoo and have a wash. We have wetwipes on board – we are allocated two or three each a day. If you go to the toilet you wash your face, behind your ears, under your arms and finish off with your bum. You do not do it in reverse order. We live like heathens.

Some guys go to the toilet off the back of the boat but it is safer to do it on the loo when it is rough. There is not a lot of privacy on board so you can’t afford to have any inhibitions.

It is the hardest thing on the boat to do. You have to wriggle in, take all the clothes and harness off and get your pants down then get in position, do your business as the boat is leaping off the waves and pump it out of the boat as quickly as you possibly can or it will end up in your lap. Then you have to clean up and clean out.

I have become nocturnal on boats. It is so hot in the tropics during the night that you look forward to sailing at night when it’s cooler. It’s the complete opposite in the Southern Ocean when you can’t wait for the sun to come up because you have been sailing off the end of the earth for hours on end which is really hairy.

Sometimes I wonder why we do this until you get a magical moment – and we get loads of those.

Previous news: Taiwan debates with mainland at Boao on democracy vs. efficiency

Next news: Hainan arbitration model could be good resolution for nation’s medical dispute