The Lohengrin super yacht is among the stars of the show at Hainan Rendez-vous 2012. — AFP/Relaxnews pic
The ranks of China’s rich have jetted in to the southern island of Hainan this week for the country’s premier celebration of all things luxury — and the world’s top-end brands have been hosting parties and trying to tempt them to spend on everything from art to private aircraft.

Hainan Rendez-vous 2012 has taken up residence at various locations around the island, from the local marina through the luxurious Mandarin Oriental, Sanya, and on to the airport, and by the time the four-day show finishes tomorrow, organisers are confident more than 15,000 guests will have taken in this year’s event.

"We have been amazed by the response, not just from China but from people coming in from all over the world,” a spokesperson for organisers China Rendez-Vous Ltd said yesterday.

With Hainan’s efforts to position itself as a base and a stop-off point for the world’s cruising yacht community, the event has for the past two years of its existence focused primarily on yachts and super yachts and this year has seem more than 130 of the very most money can buy on display.

Among them has been the United States-built, 49-metre long Lohengrin super yacht that includes among its features marble whirlpool baths and 180-degree vistas of the open sea from its master bedroom.

But the tastes — and the needs — of China’s rich are rapidly changing. “For the first time we are finding that the attention is more on business aviation than on yachts,” explained Mike Simpson, founder of the Hong Kong-based Simpson Marine, which has a stand at Hainan Rendez-vous 2012.

"We think the aviation market is something that will develop across China much faster than the super yacht market.” 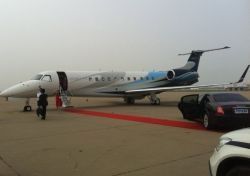 The Embraer Legacy 650 on display at Hainan Rendez-vous 2012. — AFP/Relaxnews pic

That’s why, Simpson said, his business was now expanding into the private jet market, backed by moves by the Chinese government to free up airspace to the private airplane owner.

According to the Chinese Luxury Consumer White Paper 2012, released earlier this month, China now boasts 63,500 “ultra high-net worth individuals” with personal assets of 100 million yuan (RM49 million) — and 30 per cent of those individuals are in the market for private jets.

At present there are 200 registered private jets in China but as Simpson explained that was mainly due to the time it gets permission to fly. “It can take a week but that is soon expected to change to 24 hours which will change everything,” he said.

Among those exhibiting at the event are Boeing Business Jets, Dassault Falcon and Embraer.

Simpson has also this year been surprised by the “international’’ feel of the event. “Word had got out that this is the big event for luxury in China,” he said. “All the world’s big luxury brands are here because everyone wants to stake their claims in China but people have come here from all over the world. It is a huge social event as well a brand event and there have been amazing parties every night.”

Hainan Rendez-vous 2012 has positioned itself as “the pioneering lifestyle event for China’s top business leaders and entrepreneurs” and has looked to tap in to China’s growing number of wealthy citizens.