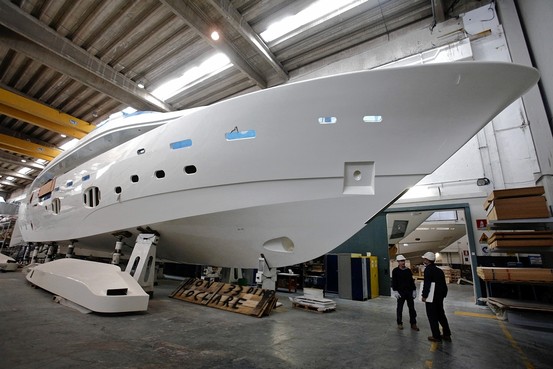 A Ferretti yacht inside a warehouse at a company shipyard in Italy last year. Ferretti’s new owner is China’s Shandong Heavy Industry Group.
Once facing bankruptcy, Italian yacht maker Ferretti Group has become the latest purchase by Chinese investors with a taste for luxury and an eye toward their fast-growing home market.

But that relationship comes with a challenge: preserving the brand’s mystique as financial backing is provided by owners from a country with little reputation for luxury. At Ferretti, its new owner is China’s state-controlled Shandong Heavy Industry Group Co., whose businesses include making bulldozers.

The solution is to focus on what each side knows best, says Lamberto Tacoli, Ferretti vice president of sales and marketing. Shandong is focused on growth and hopes to boost sales in the next three to five years, he said. It also plans on an ambitious expansion in China.

At the same time, he said, the company is aware of Ferretti’s historical value and intends to preserve its Italian culture. "They know logistics very well, and we know how to sell yachts and a luxury lifestyle that people want," Mr. Tacoli said.

Shandong Heavy said in January it would invest €178 million ($234 million) in capital and extend credit lines worth €196 million to Ferretti in exchange for a 75% stake. It marked the latest deal in the small but growing number of Chinese purchases of luxury names.

Though its executives may know the brands personally, Chinese companies tend to lack branding skills and have little experience in luxury, said Ben Cavender, a senior analyst at China Market Research Group. Luxury marketing often requires a famous name and a sense of history, something Chinese owners can have a hard time supplying with just three decades of rapid industrial growth behind the country.

"Chinese consumers want to buy things that have a story, a history and a culture, so they’ve relied on Europe to access those," said Sante Schiroli, general manager in China for Italian marketing agency Studio Pleiadi International.

Many state-owned companies realize they need to build brands because China’s costs are rising and it can’t compete on price much longer, so some turn to European companies with decades of experience. "If the Chinese companies keep the European management in place, there’s a high likelihood for success," Mr. Cavender said.

Ferretti’s and Shandong Heavy’s goals highlight the available opportunities in the emerging yacht industry in China. There are 63,500 Chinese with assets of at least 100 million yuan ($16 million), yet only 100 of China’s richest people own yachts longer than 40 to 60 feet, according to the Shanghai-based wealth research firm Hurun Report.

Mr. Tacoli says Shandong Heavy executives believe Ferretti can become the largest yacht company by sales in China, one of the most critical emerging markets for the yacht industry. Currently about 10% of Ferretti’s yacht sales are in China, he said. Ferretti, which isn’t publicly traded, doesn’t disclose detailed financial results.

Ferretti’s business isn’t changing much, as production will remain in Italy, Mr. Tacoli said. The company is producing more varieties of boats, from 25-foot crafts in the low-million-dollar range to 250-foot superyachts that sell for more than $100 million. It is adding a sales base in Hong Kong; opening an office in mainland China’s yacht hub and tourist hot spot of Sanya, on the island of Hainan; and expanding its dealerships all across China.

Mr. Tacoli also said Ferretti and Shangdong Heavy are considering launching a special China-only line that could be produced in the country. Its current brands include Pershing, Bertram and CRN.