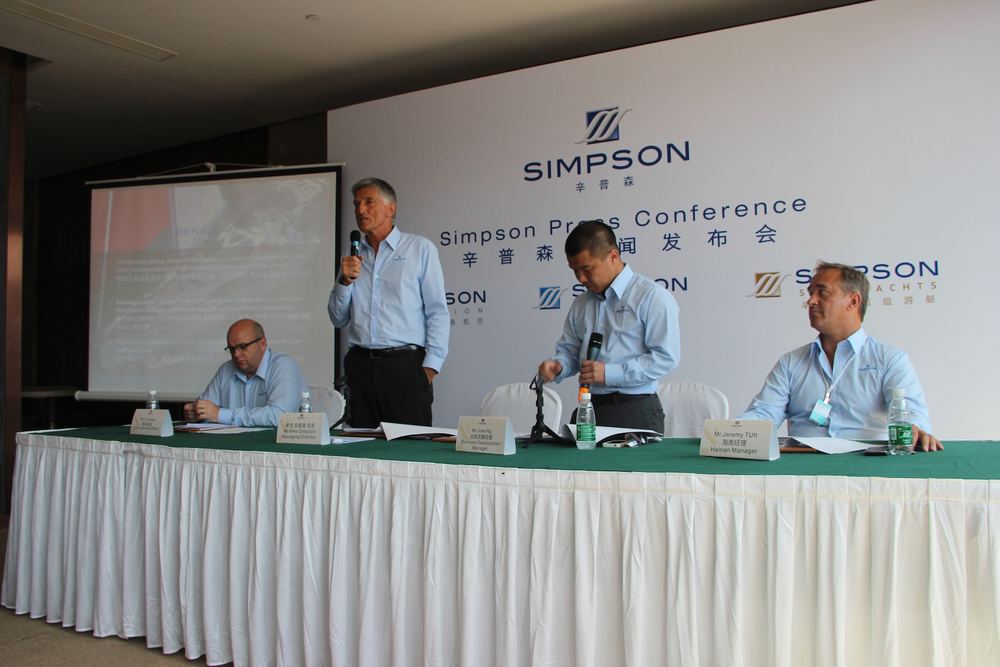 Marking the launch of Simpson Marine’s yacht expansion strategy in China, a press conference was held at the Sanya Visun Royal Yacht Club on 6th April alongside the 2012 Hainan Rendez-Vous which was well attended by journalists and industry professionals from all around the region.

During the press conference, the award-winning Asian yacht specialist Simpson Marine announced that they will expand its presence in China by opening new offices in April in both Shenzhen and Sanya, the newly emerging center for luxury lifestyle in China.

As the leading Asian dealer and distributor for a wide range of top European and American yacht brands including Azimut yacht of Italy, Lagoon Catamarans from France, Mautor’s Swan of Finland and France’s Beneteau powerboats, Simpson Marine has set up its service centers in Hong Kong, mainland China(Shenzhen and Hainan), Singapore, Malaysia, Indonesia, Philippines, Taiwan and Thailand.

Mr. Mike Simpson, the founder of Simpson Marine said China’s luxury market is growing fast and yachts are becoming the must have status symbol of super rich. He also added that no other dealer in the Asian region is able to offer the same level of one-stop regional support to not only guide customers through the yacht purchasing process but also ensure they receive a full range of back-up services they need to enjoy the yachting lifestyle.

In the meantime, he also announced that the company will add two new business units to its portfolio: Simpson Superyacht and Simpson Aviation to cater exclusively to the very top end of the luxury yacht market as well as its high net worth clients.