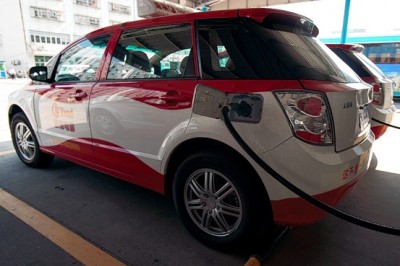 China to step up efforts to cut emissions in the world’s biggest auto market
China is promoting clean-energy vehicles for public transportation in seven more cities on top of the 13 cities that began promoting such vehicles last year, the Ministry of Finance (MOF) said last Wednesday.

The 13 cities, including Beijing, Shanghai, and Chongqing, started promoting hybrid, electric, and energy-efficient vehicles in 2009 for taxi, bus, sanitation and post office use.

The MOF will provide subsidies to provincial and municipal government finance bureaus for promotion of such vehicles, the statement released by the MOF said.

Local governments will have to apply for the funding based on a promotion plan. The statement did not elaborate on the total amount of funding or a time frame for the program.

China on Tuesday released details of its green-car subsidy program that is designed to boost the nation’s auto industry and cut vehicle emissions.

Subsidies of up to 60,000 yuan (8,784 U.S. dollars) will be given to buyers of pure electric vehicles in cities taking part in the pilot program, Shanghai, Changchun, Shenzhen, Hangzhou and Hefei.

Buyers of plug-in hybrid cars will receive up to 50,000 yuan in subsidies.

Next news: Finding entertainment after dark in Sanya