HomeNews & Social MediaSanya NewsTeam Sanya in Tauranga, race to get it shipped to Miami, USA

Team Sanya in Tauranga, race to get it shipped to Miami, USA 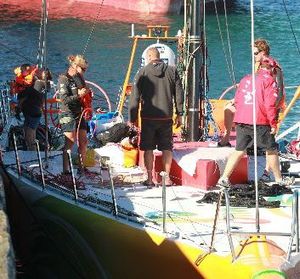 Team Sanya on-shore crew rigger Robyn Hilton is hoisted up the mast before it is removed in preparation for the boat to be shipped to America. Photo / John Borren
They were in the lead and in the race of their lives when disaster struck.

The sailors on Team Sanya were 1500 nautical miles into leg five of the Volvo Ocean Race and battling winds of up to 25 knots and waves up to 3m in the treacherous Southern Ocean.

Suddenly they heard a deafening bang, then silence, followed by the sickening sound of water gushing into the yacht. Team Sanya’s starboard rudder had snapped, punching a hole in the hull.

The boat was crippled and with 5000 miles to go in the leg to South America, the gutted sailors had no option but to stop the water coming in and limp their way as quickly as they could to Tauranga.

This morning, the sailors and their support crew were in another race – this time to have the boat ready to be loaded on to a container ship due to set sail tonight for the US, where the damaged yacht will be fixed and ultimately re-join the race.

Team Sanya arrived in Tauranga just after 9pm on Tuesday, docked overnight at Tauranga Bridge Marina and sailed to a berth at the Port of Tauranga at 10am yesterday.

Once the boat was tied up, on-shore and boat crew members worked quickly to empty the boat of all its equipment, and piled it up on the dock before it was packed into a shipping container.

On-shore crew rigger Robyn Hilton was hoisted up the mast and checked it from top to bottom, before the mast was lifted off the floating vessel and on to the dock.

Skipper Mike Sanderson, a New Zealander, stood on the dock and looked down on the damaged ship. He said it was bittersweet to be back on dry land.

"We had 5000 miles ahead of us so finishing [the leg of the race] was not an option. We did what had to be done at the end of the day because this is very serious game playing in a very dangerous part of the world," he told the Bay of Plenty Times.

"There’s a lot of money at stake but when there’s lives at stake that’s the most important thing."

About a week ago, the Chinese-flagged entry was leading the fleet in leg five from Auckland to Itajai, Brazil, when things went horribly wrong. Mr Sanderson said the boat was travelling between 20-30 knots in large seas when the crew heard a deafening bang. "Quite quickly we realised we had done some major damage. There was quite a lot of water coming into the boat but the guys managed to do a really good job of stabilising the boat quickly and we managed to shut the water-tight door," he said.

"From then on, that put us on a tight deadline because we had a spare rudder but we weren’t able to use it because the boat was so badly damaged when the first one broke off so we had to use our emergency rudder but we had to be extremely careful because that was the last option we had."

"We certainly weren’t pushing it, we could only sail at 60 per cent and we only had race sails on board so we had to look after those.

"And while we weren’t racing anymore, we still had to get back here pretty quickly so the boat could be packed up in time."

Andres Soriano, media crew member posting to the team Facebook page, said the broken rudder had been both a horrible shock and a huge disappointment.

"I had just come below and when I heard the bang I knew we where in trouble.

"The split second silence was followed by an all-too-familiar sound of the Niagara Falls as the water came charging into the boat. There wasn’t much to say then, and even now it is difficult to find words that would do our feelings justice … It is truly gutting and quite unbelievable," Mr Soriano said.

Mr Sanderson said the support in Tauranga had been outstanding.

"Everyone has bent over backwards to help us, they’ve moved boats to fit us in, everyone’s been incredibly helpful … this is the best place in the world."

DHL, the race’s official logistics partner, organised all the team’s freight and arranged for Pollock Cranes to haul the boat out of the water yesterday.

Mr Sanderson said the boat had to be loaded onto the container ship Maersk Bratan by 11am today. It is due to depart Tauranga tonight and reach Savannah, USA, on April 27.

David Duff, chief operating officer for Team Sanya, said once the team reached Savannah, the boat would be reassembled and repaired.

"We will then sail the race boat for the 350-mile trip from Savannah to Miami as a shake-down opportunity and we should be in place in Miami in early May, in line with the other race boats that are expected there on May 6."