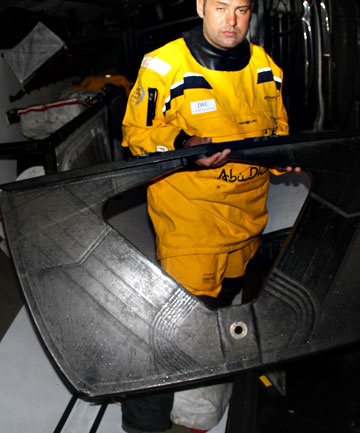 An Abu Dhabi crewmember holds the J4 bulkhead which was ribbed clean out of the forward section of the VO70 just out of Auckland on Sunday.
Just 12 hours after they slunk back to the dock in Auckland last night, Abu Dhabi Racing were ready to race back to sea to join the battered Volvo Ocean Race fleet trying to make headway in their dive into the Southern Ocean.

After Abu Dhabi’s shore crew made rapid repairs to the forward bulkhead, torn out when the boat crashed off a wave 40 miles out of Auckland, the sailing crew were planning to rejoin the race early this afternoon.

The sailors were distraught last night when they arrived back at the already packed-up race village; watch captain Robert Greenhalgh dismally announcing "the end of our competitive leg".

However there was some newfound optimism this morning, as the repair work was done at lightning speed – and the rest of the fleet were making slow progress upwind in gale force conditions.

Abu Dhabi skipper Ian Walker is banking on the fleet having to sail a longer distance than his boat, to skirt around the massive tropical depression now hitting the North Island.

At the end of every stopover, rival shore crews stage a competition to see who can pack up their containers quickest after the boats have set out to sea. Ironically, Abu Dhabi Racing won that war yesterday – only to have to unpack all of their equipment when their boat turned back to shore six hours later.

Walker could not have been more impressed with the shore team’s efforts to repair the bulkhead that holds the crucial J4 headsail.

"Had we been a week into the leg we could have carried on," Walker explained. "I don’t think it was a structural threat to the boat, but it would have been a big repair to get the bulkhead back in and take the load of the J4, which is a sail we’re probably going to use 80% of the time in the Southern Ocean.

"We discussed it and took the decision that we’re only 40 miles from Auckland, let’s come back and we’ll probably repair it quicker and better, and then we can get back out and try to catch everyone up."

Meanwhile at sea, the other five boats have finally begun the charge south, after sailing north east through the night to escape the worst of the weather – wind gusts of 40 knots have belted the fleet this morning.

Telefonica are leading the pack, with Camper just 5 miles behind. At the rear, Team Sanya is 22 miles off the pace.

Next news: Halfway into VOR, Sanya sails out of Auckland 1st