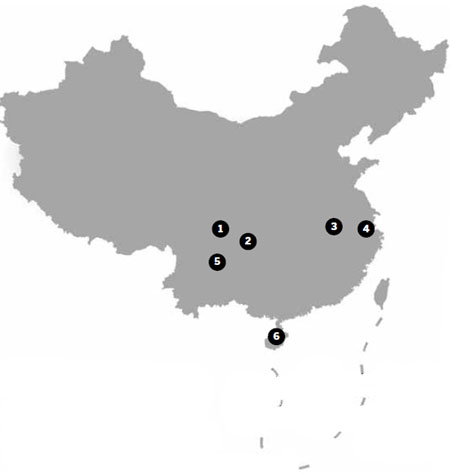 Hanson Yuanda Group headquartered in Chengdu recently announced its plan to build 10 large China Dreamland theme parks with intellectual property rights in the coming five years. Combining traditional Chinese culture with the business model of Disneyland, they will integrate industries ranging from amusement, sightseeing, business and eco-living. The first park will be finished in October in Qinghai province, highlighting the scenery of the Qinghai-Tibet Plateau and the folk customs of the local nomadic people.

Leading the nation’s four municipalities in trademarks with geographical indications, Chongqing added 13 new GI marks in the first half of the year to bring the total to 142. Local officials also noted significant growth in trademark applications since the beginning of this year with more than 13,000 new trademarks by June, an increase of 32 percent year-on-year, including 13 well-known brands.

To be built by privately owned companies and capital, a central business district for intellectual property serving the Asia-Pacific region was announced last week that will include IP trading markets and a training center. Coordinated by the government of Shanghai and the State Intellectual Property Office, it will focus on services for medium and small-sized companies and make IP commercialization, trading and training.

Customs officials in Xishuangbanna recently seized 2,450 pirated video and music DVDs in a shipment of cargo, the largest number in recent years. Officers found the undeclared products when they were checking a vehicle about to leave the country. The discs included foreign movies, TV dramas, animation and music, as well as pornography.

The Haikou national high-tech zone was recently named a national pilot zone for intellectual property, the first in the province. Over the past three years, the number of patent applications from companies and research institutes in the zone increased an average of 15.6 percent annually. Some 168 patents were granted in the period including 18 international invention patents. Another six zones across the nation were also given pilot status by the State Intellectual Property Office at the same time.

Next news: Experts introduced to boost development in Sansha