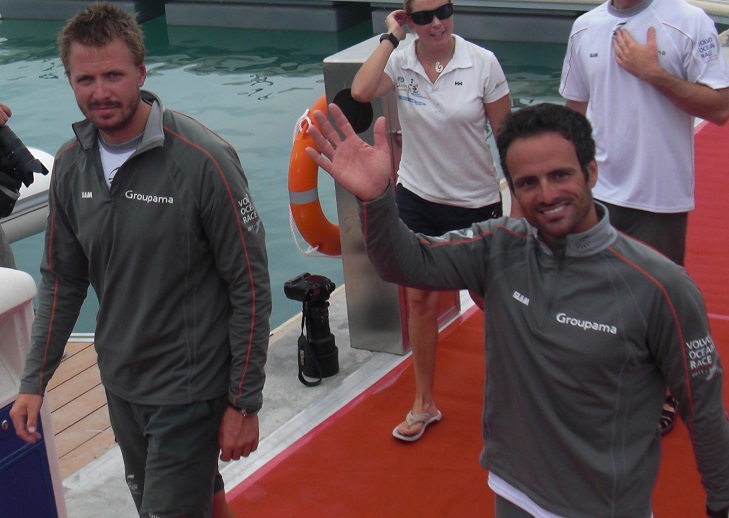 Groupama sailing team survived a late scare to secure a dramatic victory on Leg 4 of the Volvo Ocean Race on Saturday, crossing the finish line shortly before midnight in Auckland to end Team Telefónica’s winning streak and give New Zealander Brad Marsh a homecoming of a lifetime.

The French team, appearing in the race for the first time, had to isolate a leak and furiously pump out around a ton of water after suffering damage to the bow within hours of the finish line, following repeated upwind pounding in eight-metre waves over recent days.

Quick work from the crew averted a potential disaster, ensuring bowman Marsh would be the first New Zealander into Auckland, with PUMA still more than 100 nm behind them and locked in a tense battle with Telefónica — winners of the first three offshore legs — and CAMPER for the remaining podium places.

“I’m pretty sure we’re going to have a good time here with all the sailing fans. It’s a good place to win for sure."

Leg 4 began in Sanya back on February 19 with a Stage 1 sprint designed to keep the fleet out of the worst of the weather in the South China Sea.

Stage 2, over 5,220 nm, began with a staggered start based on finishing positions in that first stage. Groupama finished Leg 4 at 10:3347 UTC (local Auckland time: 23:33:47) in a total elapsed time of 19 days 15 hours 35 minutes 54 seconds, with the result confirming that they are serious challengers for the overall title.

1200 UTC on Saturday, PUMA Ocean Racing powered by BERG were holding on to second place, followed by Team Telefónica in third and CAMPER with Emirates Team New Zealand in fourth.

Going into Leg 4, Telefónica were 18 points ahead of second-placed CAMPER on the overall leaderboard and 28 points clear of Groupama. With the French team taking 30 points for the leg victory, they briefly went to the top on Saturday, though barring accidents Telefónica will regain the lead when they come in on Sunday.

There was no one more delighted on board Groupama 4 than Marsh, the Auckland native who won the informal race to be the first of the 20 Kiwi sailors in the race into New Zealand.

"It feels amazing," Marsh said. "It’s a childhood dream for me. I didn’t allow myself to think about winning up until today. But the excitement set in as we came down the coast and I realised it was all going to happen."

It was also a fantastic moment for Cammas as Groupama became the first French boat to take line honours coming into Auckland in a Whitbread/Volvo Ocean Race, though 33 Export, skippered by Alain Gabbay, did win here on handicap back in 1977-78.

After finishing third in the Stage 1 day race, Groupama 4 led the fleet out into the South China Sea, probably the most dangerous section of the 5,220 nm leg.

On day two, skipper Cammas took the decision to go south and by 2200 CAMPER had taken a slim lead after a day of horrible upwind slamming.

The wind soon died but the sea state remained big and sloppy and the exit of the South China Sea looked to be a painful affair.

A change of waypoint dropped Groupama to fourth on day four but they were back in front the following day as the fleet tracked north towards Japan.

The key move from Groupama came on day seven as they split from CAMPER to a more northerly position. It set them back on the leaderboard in terms of distance to finish but gave them a position from which to control the fleet, by moving north or south according to the wind pressure.

They led the fleet through the Pacific Ring of Fire and never relinquished the advantage.

"The key thing for this leg was to be quick and to make good decisions,” Cammas said today. “We knew we had to do both of those things and we did. This is where we ended up.

“The turning point in the leg was when we made a very bold call with PUMA in the north and it paid off. That was the decisive moment."

Groupama’s victory marks the Volvo Ocean Race’s eighth visit to Auckland and the first since the 2001-02 edition stopover in the city.

Previous news: 8M waves set the tone for the 6 VOR fleets on the approach to Auckland