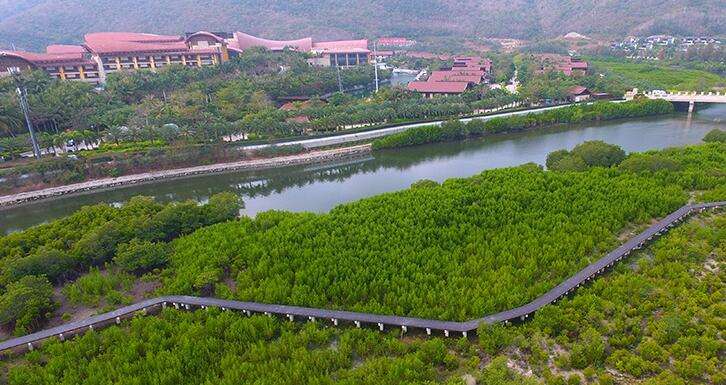 CHINESE Internet users say property developers are destroying a mangrove forest in Qingmei Harbor Mangrove Nature Reserve in Yalong Bay, Hainan Province.
Internet users have uploaded earlier pictures of the reserve, comparing them with current images of the area.
A five-star hotel, a marina and villas have been built at the estuary of Yalong Bay in Sanya City, a popular tourist resort area.
Netizens say more mangroves may die due to further development in the bay as the country plans to transform the island province into a world-class tourism destination.
A newly built upscale hotel and a marina along with some luxury villas now surround Qingmei Harbor Mangrove Nature Reserve, where a significant number of mangrove trees have become yellow or withered.
A regulation passed by the provincial government in July 2011 banned construction of tourist facilities affecting the sustainable use of mangrove forests.
Mangrove forests serve as natural barriers to typhoons, tsunamis, unusually high tides and prevent soil erosion, said Li Haiqin, a member with a local forest protection organization.
Rapid development has taken place recently, which is threatening the local ecological system. Plenty of coastal forests have been destroyed, Li said.
Experts have started to investigate the cause of the destruction of the mangrove trees, said Lin Guisheng, director of Sanya Wildlife Protection Center.
A preliminary investigation shows construction work at the estuary is connected, to some extent, to the deterioration of the mangroves, according to Wang Wenqing, associate professor with the College of the Environment and Ecology, Xiamen University.
SOURCE: shanghaidaily.com

Previous news: Sanya offers plenty of fun after the sun