Journalists investigating claims against Tech firm in Haikou get roughed up 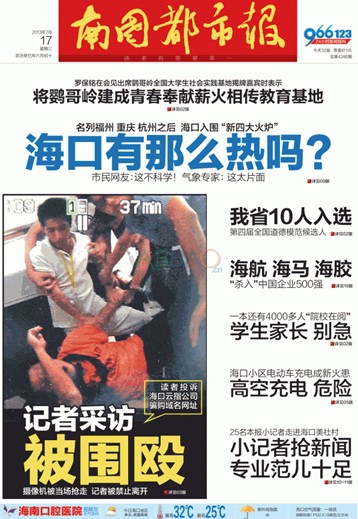 The Nanguo Metropolis Daily ran a front page story titled “Journalists mobbed during interview,” featuring a photo of a dramatic scene, with several journalists being beaten up and sustaining injuries to the face and hands. Luckily for Nanguo, they came out of the altercation relatively unscathed, but their colleague from Hainan Live TV had more serious injuries.

According to the article, it all began earlier this week, on the 16th, when a woman going by the last name Zheng, who worked for a separate company, tipped off the paper saying she was coerced into engaging in an investment by the company in question, Yunzhi Information Technology. Zheng’s boss, who was initially invited, was out of town, so she went to the meeting in his place. After hearing a presentation, Zheng claims a group of “seven or eight men” surrounded her, demanding that she make an investment. A suspicious Zheng made an excuse for not wanting to involve herself with the company, saying she had insufficient funds in her bank account to fulfill the required 4,000 yuan ($650) investment. Still, the men were able to talk her into handing over her bank card, extracting 5,000 yuan from her account. Zheng’s manager eventually contacted the company, demanding they return the money, but Yunzhi refused. That’s when Zheng turned to local media.

Several local media outlets arrived on Yunzhi’s company premises, asking for a response to the allegations brought forward by Zheng, but were rejected. A manager rushed over to the Hainan TV reporters, blocking the cameramen from obtaining footage. He then took the camera, pushing the cameraman to the ground and punching him in the face. Still holding the confiscated camera, the manager began shouting “This company does not permit photography, and we don’t want any gossip going around about us!”

Police were called to the scene, at which point accusations from both sides were made. The superintendent of Haikou’s Longhua district, who was the first official to report the confrontation to local enforcement, said that justice will be done, saying that local authorities “will certainly administer severe punishment for impeding interviews and beating up journalists.” But Yunzhi can’t be found. The bad press seems to have been enough for the company to close up shop. All traces of Yunzhi onlnie have vanished.

SOURCE: ibtimes.com
Editorial Message
This site contains materials from other clearly stated media sources for the purpose of discussion stimulation and content enrichment among our members only.
whatsonsanya.com does not necessarily endorse their views or the accuracy of their content. For copyright infringement issues please contact editor@whatsonsanya.com

Next news: 1st phase of new dock in Sansha City put into operation