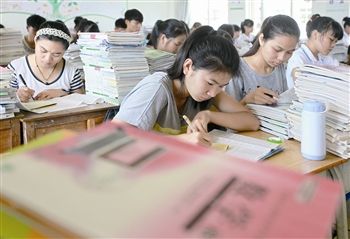 Forty high school students in south China's Hainan province are not allowed to return to their classrooms until they finish a three-day "moral education" program.

As their classmates begin the new spring semester, these so-called "problem students" have to complete a moral education program and submit a statement of repentance for their behavior that violated school rules, said a student's parent surnamed Yuan.

They can not return to the classroom unless the statement, which must be signed by both their parents and class advisors, is approved by authorities with the First Middle School of Sanya, Yuan said.

These "problem students" are being punished for their misbehavior, such as being tardy or absent, cheating on exams with mobile phones or using banned power connections in the dorm.

Information about the school's moral education program has been posted online, prompting debate amongst netizens.

"The moral education program labelled them 'problem students' and isolated them from others. It is so arbitrary and rude to punish these teenagers, but not help them in a fair manner," netizen "Fan Zijun" wrote in the comments section of a local news website.

It is important to educate them and help them strengthen their awareness of discipline and social responsibilities, but the school should also consider the students' practical needs, Fan added.

However, other netizens have applauded the school, saying the moral education is healthy for the teenagers' development and gentler than some traditional punishments, such as expulsion.

During the three-day program, the students study school rules and regulations in the morning, and their parents also come to the school to join their children in recording their experiences.

If school authorities give their approval, the students can return to class. If not, they will not be allowed to register for the new semester.

"The school's principal is not giving up on students having difficulties with their studies or their behavior," said Lu Yihuai, president of the First Middle School of Sanya.

"We opened the moral education program in hopes of cultivating their awareness of responsibility. They should be responsible for their misdeeds and be willing to improve their behavior," said Lu.

"After one semester, we think it is effective," Lu said, adding that the school is considering hosting the program during non-school hours and improving the program's content.

The First Middle School of Sanya, however, is not the first school in China to introduce a controversial practice meant to curb misbehavior or poor academic performance.

The First Experimental Primary School in the Weiyang district of the northwest city of Xi'an, issued green kerchiefs to students who needed to improve their grades or behavior. Other students wore red kerchiefs, which is part of the standard uniform for primary school students throughout China as well as a color traditionally favored by Chinese culture.

Next news: Camper leads on 3rd day from Sanya, 4th leg of the Volvo Ocean Race