Sanya used in sexy female bodyguards’ training for its topography 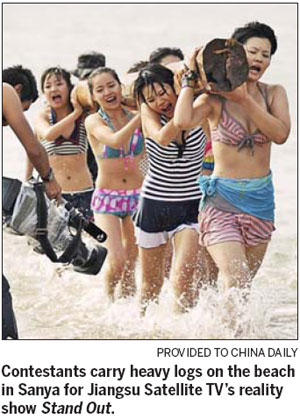 While photos of scantily clad women are common on the Internet, one series of 17 swimsuit clad seductresses on the tropical beaches of Sanya, Hainan province, has been making the rounds – and not merely as eye-candy.

It’s because audiences have loved watching these beauties – who hail from career backgrounds ranging from university student to professional acrobat – being punched, kicked and nearly drowned at a boot camp for professional bodyguards.

The show is the latest segment of Jingsu Satellite TV’s program Stand Out, a reality TV show that focuses on recruitment in various sectors.

"There is a surge in demand for women bodyguards in China," producer Tang Jia says.

"They’re sought by entrepreneurs and celebrities – especially females. They’re less conspicuous than men and can do other jobs, too, such as secretarial work. That’s why we focus on this sector and document the process of becoming Charlie’s Angels."

The 17 contestants will undergo more than two months of boot camp and trainings to sharpen their reconnaissance and anti-terrorism capabilities.

The last woman standing will continue her training at the International Security Academy in Israel and could win a bodyguard gig with a yearly salary of 300,000 yuan ($47,670).

"We chose Sanya as our training base because the varied topography creates challenges," says Chen Yongqing, founder and chairman of the Beijing-based bodyguard agency Tianjiao Special Guard/Security Consultant Co Ltd, which hosts the contestants’ training.

Chen says the grueling physical training activities, such as carrying heavy logs and doing sit-ups and push-ups in ocean waves, are the basic procedures used to train competent female bodyguards.

"Bodyguards are responsible for their clients’ safety and will face many dangerous moments," Chen explains.

"Being terrible to them now is good for their careers later."

Chen insists the requirement that women wear bikinis is not a publicity stunt but rather is meant to strengthen their wills.

"If they can stand physical tests and being yelled at while wearing a swimsuit, they are mentally strong enough and can better protect their clients," Chen says.

The show airs on Jingsu Satellite TV every Tuesday at 10 pm. The women bodyguards segment will end on Feb 21.