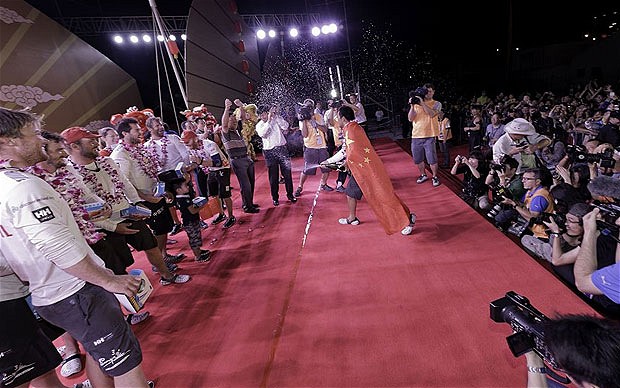 Getting a soaking: Team Sanya crew finish sixth in home leg Photo: GETTY IMAGES
From the top of an Olympic podium to scrubbing barnacles from the bottom of a boat, Dane Martin Kirketerp is making quite a sacrifice in the hope of one day sailing around the world in the Volvo Ocean Race.
The word ‘unassuming’ does not do justice to Kirketerp, who won gold in the 2008 Beijing Olympics in the 49er class in Qingdao despite the fact that he has one glass eye.

He hopes to taste glory again by competing in the Volvo Ocean Race but for now that seems a distant goal as he works his way up from the bottom, scrubbing and polishing the boat as a member of the shore crew for Chinese team Sanya.

"Winning the Olympics was the best feeling in the world," he told Reuters. "It was ecstasy for me.

"I spent the next four months enjoying myself but I knew I wanted to come and sail around the world, to get that same feeling of the adrenaline rushing.

"I’m not there yet but a wise man once told me you get a long way with hard work. All big things come from starting small so that’s just what I’m doing."

While the 11 onboard sailors received a rapturous welcome from the crowds at their home port when the race arrived in Sanya in southern China this month, Kirketerp went on working unnoticed in the team’s shore base.

He will continue to bide his time for the remainder of the round-the-world race, which started in Alicante last year and will not finish until July in Galway, in the hope of being called up as a substitute or, more likely, getting a chance in the next race from 2014-15.

Kirketerp plays down a battle with cancer that caused him to lose an eye when he was one and a half years old.

"I don’t speak about it, not having one eye," he says. "It’s just part of who I am and I don’t even think about it. I always had it so I don’t know any different.

"And anyway, I’d rather lose an eye than an arm. You can’t grind winches on a boat with one arm, but with one eye it’s no problem."

Victory for Denmark’s Kirketerp and Jonas Warrer back in 2008 came against the Spanish pair of Iker Martinez and Xabi Fernandez, who were then Olympic champions.

While the Spaniards had to settle for silver on that occasion, they are on the crest of a wave now as skipper and trimmer onboard Telefonica, the team currently leading the Volvo Ocean Race after winning the first three offshore legs.

Kirketerp, bu contrast, has turned down offers of coaching at the London Olympics and at this stage does not even think he will be in England to see his own event.

"My job here now is about cleaning and polishing the boat, keeping things in place in the workshop, but it’s a stepping stone to other things," he said.

"I have a lot to learn about these boats and this kind of sailing and hopefully I may get a chance to sail a leg or two even in this edition."

SOURCE: telegraph.co.uk
Editorial Message
News translation appearing here is the property of www.whatsonsanya.com, however, for those who wish to copy the contents in part or in full, please make reference and link the article copied to our site. Whatsonsanya.com does not necessarily endorse their views or the accuracy of their content. For copyright infringement issues please contact editor@whatsonsanya.com

Next news: Hainan looks to Property Vacancy Tax to fill up empty apartments