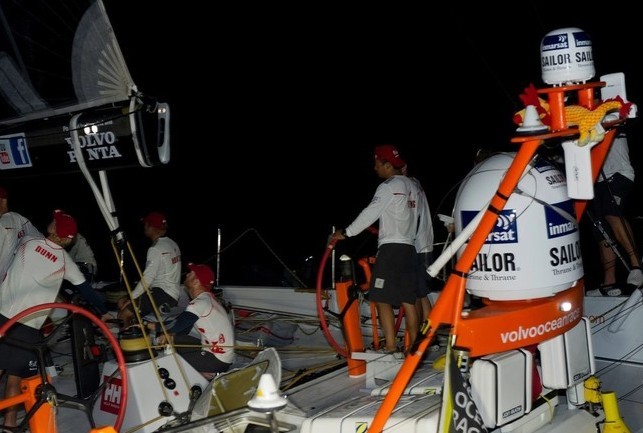 ‘Teng Jiang He helming Team Sanya, skippered by Mike Sanderson from New Zealand finishing sixth on leg 3 of the Volvo Ocean Race 2011-12 from Abu Dhabi, UAE, to Sanya, China.’ Paul Todd/Volvo Ocean Race©
Volvo Ocean Race – ‘Tiger’ Teng Jianghe is now back in his home country and talking about his dreams that are a lot bigger than just completing the race. The Team Sanya sailor arose from nothing to run his own highly successful business and wants to become the VOR’s very first Chinese skipper.

‘Why not?’ the 37-year-old asked when speaking to volvooceanrace.com at a beachside barbecue he and his family were hosting for his team mates on Friday night.

‘Puma’s skipper Ken Read is 50 — I am very young and have many races left. Maybe one day I can be skipper, and lead a Chinese team.’

Relaxed and enjoying a beer with his colleagues, Tiger quoted Chinese philosopher Confucius: ‘its always a pleasure to greet a friend from afar.’ Tiger and his wife of 10 years Chen Lei showcased the best of the east with a traditional Chinese barbecue, which also marked their eldest son Teng Tianyi’s fourth birthday.

‘For me, it is perfect to be home,’ Tiger said. ‘When we arrived I was so happy. We never imagined we would have thousands of people waiting for us, it was incredible.’

Despite turning his sights from his multi-million dollar business to sailing just two years ago, Tiger is proving a formidable force in the sometimes unforgiving conditions encountered thousands of miles from land.

Tiger puts his resilience down to his upbringing in a remote northern Chinese province where black bears and temperatures 15 degrees below zero are a part of everyday life.

‘Food was scarce and life was tough,’ Tiger said. ‘My home town was very small, there were no dreams for me there, so when I was 18 I made a decision and I said farewell to my parents and moved to south China to make my fortune.’

Life continued to be tough when the teenager arrived at Guangzhou. Hunger pangs and desperation forced Tiger to scour through rubbish bins for food scraps.

He found the odd day’s work for cash-in hand pay, though he continued to subsist on rotting bananas.

‘At the end of the day after they were in the sunshine they go black, nobody likes black bananas so they were very cheap, so that’s what I ate. To this day I don’t eat bananas anymore.’

Eventually, Tiger discovered his fortune, building a construction company from the ground up.

Despite the success, Tiger was left wanting more. He turned to rally car racing, but that still wasn’t enough.

‘I slowed my business and started racing cars as a professional rally racer, then I thought about sailing and that’s when I decided to make a change,’ he said.

‘I want to enjoy myself and make the most of my life and do something important. Not everything in the world should revolve around money.’

Tiger’s wife said her husband has been at his happiest since joining Team Sanya in August 2011. He is a better man, a better husband and a better father, she said, despite spending more time away than ever before. ‘When Tiger joined the team his eldest son became very proud of him,’ she said. ‘He always follows him, his father just became his idol. It’s always ‘daddy, daddy, daddy’.’