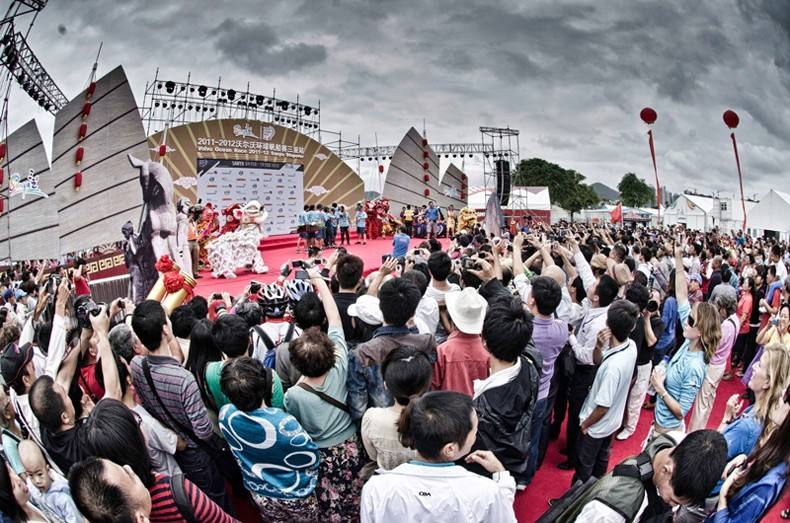 Sanya's municipal government gave the Volvo Ocean Race a spectacular official welcome to China's hottest tourist destination with a night of music and dance capped by a display from the world renowned Celebration Fireworks company.

Volvo Ocean Race CEO Knut Frostad was welcomed to the dinner reception by the Mayor of Sanya, Mr. Wang Yong, while the evening was hosted in Chinese and English by Angela Chow, a star presenter on Phoenix TV.

Guests, which included many sailors and team officials, including the whole of Team Sanya led by skipper Mike Sanderson, were treated to a jaw dropping martial arts performance by monks of the Shaolin Temple, a face changing performance from Sichuan Opera, a performance from the Peking Opera, as well as music and dance from the Li and Miao cultures.

"It was fantastic as a spectacle and it meant so much culturally," said Frostad. "It was truly a world class event — something that could have been an opening ceremony for any major sporting event.

"It was very insightful in terms of culture, reflecting just what the people of Sanya wanted to show and demonstrating once again that China can host major sporting events, just as they did with the Olympics."

The firework display, which depicted sailing boats and love hearts among many other designs, was clearly visible from the Volvo Ocean Race village and was produced by Celebration Fireworks Culture Group, who provided the fireworks for the 2000 Olympics in Sydney.

Mayor of Sanya, Mr. Wang Yong was quoted by local media as saying: "The arrival in Sanya of the team is a triumph. I hope the crew can keep a good spirit and maintain their competitive edge. Team Sanya are promoting the city worldwide and we in Sanya also follow the race and the team closely. I sincerely wish the team all the best in the journey and reach the next destination safely."

The Race Village is currently open, providing free entertainment every day. The stopover culminates in the Hai Tang Bay In-Port Race on Saturday, February 18 and the start of Leg 4 to Auckland the following day.

Next news: Bad news of Sanya travels – The Star reports in Malaysia