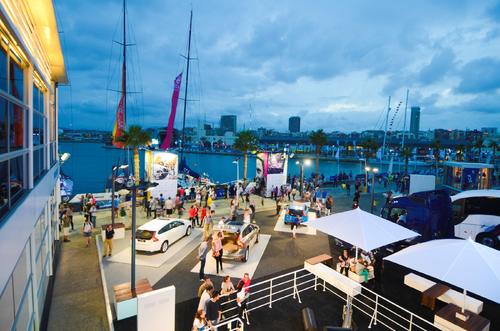 After three legs of mostly sailing against the wind, the six-boat Volvo Ocean Race fleet is gearing up to race with the wind predominantly behind them for the next four legs of the race.

Figures released by race control based on historical data suggest that Legs 4–7, (Sanya to Auckland, Auckland to Itajaí, Itajaí to Miami, and Miami to Lisbon) are likely to see the boats, in the main, sailing with the wind behind them.

These conditions typically produce higher average boat speeds and a much wetter existence on deck, as well as providing a host of new challenges for the crews.

Sailing against the wind (upwind), Volvo Open 70s reach their maximum speed (around 12 knots) in about 17 knots of wind. As the wind increases the teams are forced to de-power their boats by reducing sail.

However, downwind in the right conditions Volvo Open 70s can reach peak speeds over 40 knots (46 miles per hour) and increased wind more or less equates to greater boat speed.

In fast downwind conditions, though, everything happens 10 times as fast on board and the crews need total concentration and lightning reflexes to avoid costly wipe outs which could damage to the boat, equipment and themselves.

The forthcoming section of the race and the change of conditions could give teams the chance to close the gap on race leaders Team Telefónica, who have won all three offshore legs so far. Abu Dhabi Ocean Racing, Groupama sailing team and PUMA Ocean Racing powered by BERG will be among the teams hoping to desmontrate an edge going downwind.

SOURCE: bymnews.com
Editorial Message
This site contains materials from other clearly stated media sources for the purpose of discussion stimulation and content enrichment among our members only.
whatsonsanya.com does not necessarily endorse their views or the accuracy of their content. For copyright infringement issues please contact editor@whatsonsanya.com

Previous news: Organizer of Hainan Rendez-Vous to add a show in Tianjin in September