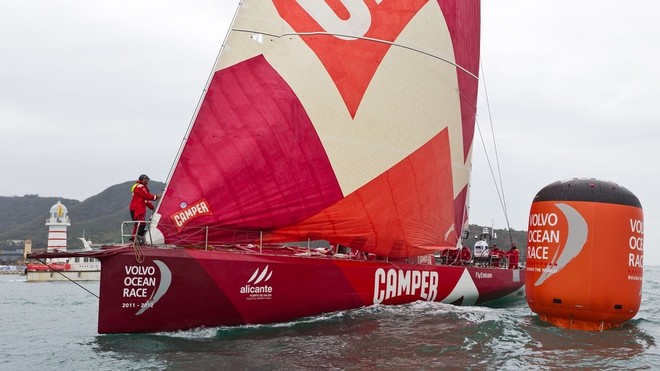 ‘CAMPER with Emirates Team New Zealand, skippered by Chris Nicholson from Australia finishes third on leg 3 of the Volvo Ocean Race 2011-12 from Abu Dhabi, UAE, to Sanya, China.’ Ian Roman/Volvo Ocean Race
Camper with Emirates Team New Zealand is calling in help from the team’s America’s Cup squad coaches. Camper is using all the resources at their disposal in order to challenge overall race leaders Telefónica.

Despite their second place overall and podium positions in all the point scoring races, Camper is keen to close the gap and improve their performance for that elusive win. But the team remains within touching distance of the summit, just 15 points adrift of overall leader Telefónica. And that’s why the little details matter.

Bringing a fresh pair of eyes to the team’s performances – particularly in the InPort races where 20 per cent of the points are up for grabs – will be New Zealand-based coaches Davis and Allen, who normally focus of the Emirates Team New Zealand America’s Cup squad. Allen has done multiple round-the-world races and America’s Cups, and along with Davis, an Olympic gold and silver medalist, they bring a wealth of experience and knowledge, which can help Camper bridge the gap in performance.

‘The purpose of them coming here is because we recognise that we’ve got weaknesses in our InPort game,’ said Camper skipper Chris Nicholson on Wednesday. ‘Even though we’ve been inshore racing quite well, we obviously believe we can do better. Quite often a good way of doing that is to bring in an external source. Because we’re so familiar with the Volvo boat and our style of in-port racing, it’s just good to bring in a fresh set of eyes, especially guys of their caliber and level of expertise – it’ll be great for us. Whether it happens here or further down the line, these guys will make a difference.’

Meanwhile Shore Manager Neil Cox has been assessing the condition of the boat after Leg Three – that was kinder to the boat than it was on the crew – and looking ahead to New Zealand.

‘Our boat is in exceptionally good shape,’ he said. ‘The leg from Abu Dhabi to Sanya was pretty kind on the boat, so the work list isn’t too extensive. What we’re really trying to deal with now is to plan ahead for the stopover in Auckland, the time there is so compressed, so we’re trying to get as much covered here as possible so we don’t have to deal with it there.’

Camper is due to go back into the water on Sunday 12th February, and have its first sail the following day. The final week will be a busy time and the Spanish/New Zealand team intend to maximise every available opportunity, both on and off the water.

SOURCE: www.sail-world.com
Editorial Message
This site contains materials from other clearly stated media sources for the purpose of discussion stimulation and content enrichment among our members only.
whatsonsanya.com does not necessarily endorse their views or the accuracy of their content. For copyright infringement issues please contact editor@whatsonsanya.com