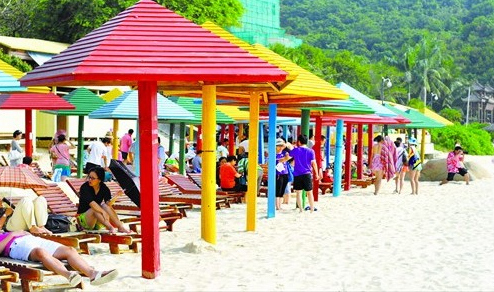 The drama over a nationwide complaint campaign over excessive pricing in the tourist city of Sanya, Hainan Province, has seen a new twist.

After first denying that there were any formal complaints filed against possible fraud at a Sanya restaurant, local authorities on Tuesday promised to deal with this issue but said no transaction records were found.

On Wednesday they went a step further, with Jiang Sixian, deputy governor of Hainan and Party secretary of Sanya, apologizing to the public for possible "rip-offs" of tourists for some food and transport services among others.

"We’ll see this incident as a chance to rebuild Sanya as a quality tourist resort while strengthening market supervision," he told the media.

Shopping centers and seafood restaurants have signed contracts with regulators, making commitments to temporarily close their businesses if it is exposed by the media they have allegedly ripped off tourists, the government said.

The latest round of public outcry over Sanya’s tourist services started last Saturday after a tourist, who calls himself Luo Di, complained on his microblog about the extraordinary high cost of his friend’s meal in Sanya. Luo said his friend paid 4,000 yuan ($634) for only three normal dishes in the Fulin Fishing Village Seafood Restaurant.

His post, which was later removed, reportedly received 30,000 comments within a day of being published. Many Web users have told of similar experiences in Sanya in recent days.

Sanya, located on the island province of Hainan in South China, has become one of the most popular tourist destinations for Chinese tourists, especially during winter days. Some are comparing it to Miami in the US.

However, the beach city is also becoming notorious for its outrageous pricing of food, boarding and almost anything tourism related.

A seafood meal at any random roadside restaurant can easily cost thousands of yuan. Hotels or so-called sea-view villas can cost more than 10,000 yuan per day.

The price of a tour to Sanya has become comparable to or more expensive than a standard tourist package to Singapore, Malaysia and Thailand, and even more than a tour to countries in Western Europe.

Shi Hui, 29, an accountant in Wuxi, Jiangsu Province, told the Global Times yesterday about her "luxury trip" to Sanya during the Lunar New Year.

Shi booked a villa in Yalong Bay one month ago, which cost her family 5,000 yuan a day. This compared to an off season when the accommodation fee is only 700-800 yuan a day.

She arrived on January 18, but when she left Sanya on January 24, the second day of the Lunar New Year, she learned that the same villa’s price had risen to 25,000 yuan a day.

"Compared to other tourists, I’m lucky, but I still feel it’s too expensive," she said.

Each meal at street vendors cost at least 1,000 yuan, while the cheapest dinner for the New Year eve in a restaurant was 4,000 yuan, according to Shi.

To save money, Shi and her husband bought vegetables and seafood from local markets and cooked in the villa.

"As it was around the Spring Festival, we weren’t sure where we could lodge a formal complaint, and didn’t want to in the spirit of the holiday," Shi said.

Film star Ma Yili also complained about extreme costs in Sanya in a resent Weibo post, explaining that two of her assistants were required to pay 800 yuan for two dishes: scrambled eggs with tomatoes and fish.

The Sanya government announced on their official Weibo on Monday that business regulators received 70 complaints from consumers and have so far dealt with 43 cases, an amount down 59 percent compared to the same period of last year.

These forms of complaints account for about 45 percent of all complaints in Hainan Province during the festival, reported the Xinhua News Agency.

The Sanya tourism department announced that the city received nearly 490,000 visitors‚ accounting for four-fifths of the local population, and that local tourism income hit 3.32 billion yuan ($526.55 million) during the Spring Festival season, up 70 percent year-on-year, according to China Youth Daily.

This news enraged many throughout the country.

"Sanya hasn’t met its goal set two years ago to be an international tourism island. We can’t stand that such greed exists in such a beautiful place," said a commentator for China Youth Daily.

Sanya’s problems have had a negative effect on its image, Zhang Shangzheng, a tourism management professor at Anhui University, told the Global Times.

"The problems reflect poor management in local tourism. Services and tourism there is backwards. Sanya’s local government should put more effort into strengthening management, otherwise the city will become the butt of jokes worldwide," Zhang said.

Though Sanya has received a lot of negative press recently, some tourism experts still have confidence in the future of Sanya’s tourism industry.

"Sanya is the only place in China with a subtropical climate. High prices during the Spring Festival are quite normal, as rare things are always more expensive," a local tourism agency staff member, who asked to remain anonymous, told the Global Times.

"This is a common phenomenon that happens during the development of an international tourism island. In the long run, Sanya will evolve into a mature tourist resort, adopting international service standards," Deng Zongde, a researcher with the Tourism Research Centre at the Chinese Academy of Social Sciences, told the Global Times.

SOURCE: english.peopledaily.com.cn
Editorial Message
News translation appearing here is the property of www.whatsonsanya.com, however, for those who wish to copy the contents in part or in full, please make reference and link the article copied to our site. Whatsonsanya.com does not necessarily endorse their views or the accuracy of their content. For copyright infringement issues please contact editor@whatsonsanya.com