Team Sanya crew relentless in their quest for more speed 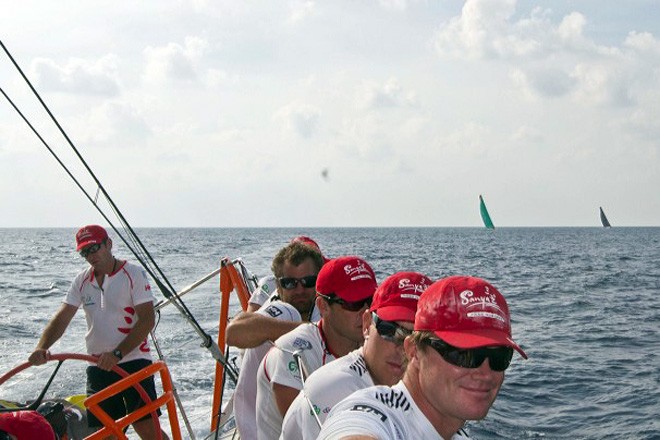 Sanderson says the Sanya crew have been relentless in their quest for more speed despite Sanya Lan being the only previous generation boat in this edition of the race.

‘We have promised to ourselves not to just use the ‘old boat’ thing as an excuse for the speed deficit and to always keep hunting to extract every single fraction of a knot out of the thing,’ Sanderson wrote in his latest report from the boat.

‘We know our time will come,’ he added. ‘If it doesn’t and we can get to the end of the leg and look each other in the eye and know that we couldn’t have got her there any faster then there is nothing more we can do.’

Last night Sanya abandoned their position as most southerly boat, choosing instead to tack almost directly north to re-engage with the fleet – a move which Sanderson confesses he may have called slightly too early.

‘Last night there was a little bit of action as we came out from underneath the large area of wind shadow that Sri Lanka casts onto the Indian Ocean,’ he explained.

‘On the eastern side there is a small convergence zone, like a mini doldrums where for a period the wind flicks from one side of Sri Lanka to the other. This gave a few of us in the fleet the opportunity to step north relatively cheaply miles-wise.

‘Camper did the best out of it, getting a nice shift to get the furthest north. I probably convinced Aksel (Magdahl, navigator) to come back with the fleet a little too early and now Telefónica who we left to it has made good gains by being further north.’

Sanderson also announced the crew had finally named their latest lucky mascot in honour of their shore boss David Duff.

‘Duff has been everywhere today, I even heard rumours of him being on deck trimming the jib. He does have a knack of when getting tired to seem to migrate to Housty’s (bowman Ryan Houston) bunk. Twice now when walking past and Housty has been sound asleep I have seen them all cuddled up.’

Having to work so hard just to stay in touch with the others means the Sanya crew are looking forward more than most to reaching the turning point at the top of the Malacca Strait, where they are banking on a chance to sail around the fleet.

‘All our efforts at the moment are to just try and stay close enough to the fleet in the hope that there is a parking lot as we enter the Malacca Strait,’ Sanderson confirmed.

‘Right now we are fully excited about the ‘Buffalo girl’ opportunities that are a real possibility,’ Sanderson concluded.

SOURCE: sail-world.com
Editorial Message
News translation appearing here is the property of www.whatsonsanya.com, however, for those who wish to copy the contents in part or in full, please make reference and link the article copied to our site. Whatsonsanya.com does not necessarily endorse their views or the accuracy of their content. For copyright infringement issues please contact editor@whatsonsanya.com

Next news: Oz surfer Heath Joske talks about his win in China Cup on Hainan