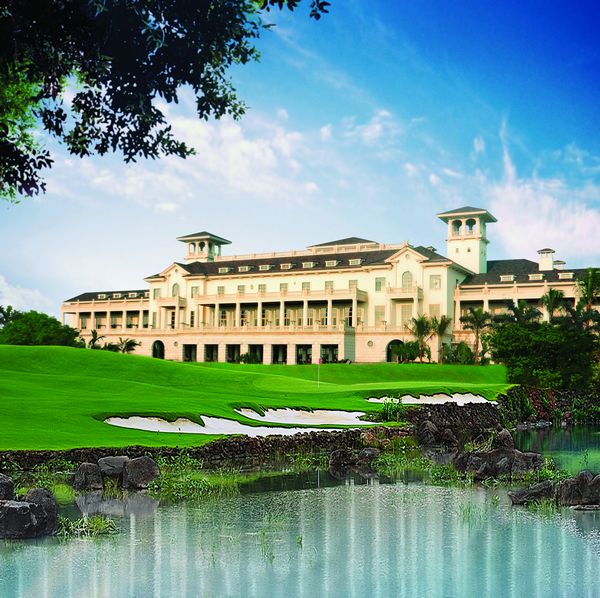 The baton for the 3rd Asia Golf Tourism Convention was passed to China at a signing and hand-over ceremony on the final day of AGTC 2013, held at the Royal Cliff Hotel and PEACH Convention Centre in Thailand’s leading golf destination, Pattaya.

An agreement to host the event, which is organised by global golf tourism industry association IAGTO (International Association of Golf Tour Operators), was signed by IAGTO President Peter Walton and Mission Hills Group Vice Chairman Tenniel Chu, who also signed on behalf of the Haikou government, the third partner in AGTC 2014, before exchanging gifts with Itthiphol Kunplome, Mayor of Pattaya City, to mark the official hand-over as host.

Addressing delegates, Tenniel Chu said: “It has always been Mission Hills’ vision to promote the goodwill through golf and we intend to advance with time and inspire happy, healthy and harmonious lifestyles and experiences for all. It was also a great opportunity to meet with business acquaintances, old friends and also the chance to make the new ones.”

Xie Jing, Vice Mayor of Haikou City, Hainan’s capital, commented: “It is a great honor that IAGTO has decided to move the 2014 Asian Golf Tourism Convention to Mission Hills Haikou, in China. This will have an enormous impact on Hainan’s strategy to develop as an international tourism Island. Hainan Island is situated in China’s tropical belt. As such it enjoys a wonderful tropical climate, with year round sunshine and fresh sea air. It really is a world class golfing destination.”

Sharing some statistics from the Mayor, Chu revealed that in 2011, Hainan Province saw more than 30 million tourist arrivals while tourism revenue grew 24% from the previous year to US$4.3 billion. In 2012, visitor numbers to the island exceeded 33 million, with travel revenue hitting US$6 billion.

“Hainan is on track to become one of the world’s leading tourist resort destinations by 2021” said Chu. He added: “With the conference taking place in Haikou, I am sure the international tour operators and service providers will enjoy and experience the exceptional services, unique lava rock golf courses and other fully-integrated facilities of Mission Hills Haikou.

“We believe that the conference will also serve to enhance Haikou’s international reputation and will help further the city’s goal of becoming the leading international destination of golf tourism.

AGTC delegates were also shown a presentation underlining the continuing growth of Mission Hills Haikou since its opening in 2010. Offering 10 courses set in a lava landscape as well as world largest Spa and Mineral Hot Spring resort accredited by Guinness World Records, the Resort will see the opening of the Lan Kwai Fong entertainment district at the end of the year, while future plans include the addition of Ritz-Carlton, Renaissance and Hard Rock hotels and the new Mission Hills • Huayi Brothers • Feng Xiaogang Movie-Themed Town.

IAGTO’s Peter Walton is also excited about Mission Hills Haikou hosting AGTC 2014. He said: “Last year, we took the inaugural AGTC to Malaysia with the intention of waking the sleeping giant that the country as a golf destination represents; the number of IAGTO golf tour operators selling Malaysia has increased by 40% in the subsequent 12 months.

“This year, AGTC was staged in Thailand, the strongest and most important golf destination of the Asia Pacific region, which attracted the attention of the golf tourism world with attendance increasing by 18%.

“Taking the 3rd AGTC to China in 2014 is an incredibly exciting step for IAGTO because in one fell swoop we will be able to showcase the fastest developing golf and tourism destination in the Asia-Pacific region while simultaneously introducing sellers from across the region to the largest-ever gathering of golf travel buyers from the world’s fastest-growing outbound tourism market – China.

“Mission Hills Haikou is the perfect venue for this event, representing as it does a complete golf destination in itself and the gateway to the international tourism island of Hainan with its enormous array of golf courses, topography and culture, all within a beautiful tropical setting.

“The buzz around the convention following the announcement of next year’s venue and destination for the 3rd AGTC was palpable and we are certain that it will surpass all expectations.”

SOURCE: etravelblackboardasia.com
Editorial Message
This site contains materials from other clearly stated media sources for the purpose of discussion stimulation and content enrichment among our members only.
whatsonsanya.com does not necessarily endorse their views or the accuracy of their content. For copyright infringement issues please contact editor@whatsonsanya.com