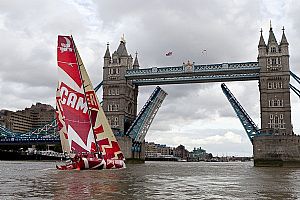 Camper with Emirates Team NZ sails up the Thames and through Tower Bridge – Ian Roman, VOR pic
After a gruelling three-month training session in the depths of New Zealand’s winter, Camper surfaced today at the end of summer in the Northern Hemisphere for an historic sail down London’s iconic River Thames.

Camper CEO and six-time Whitbread and Volvo Ocean Race competitor, Grant Dalton, said his experienced team, boasting 22 round-the-world races between them, was good to go. “We did three-and-a-half really solid months at home in New Zealand in the winter and sailed an awful lot, so if the race started tomorrow we could basically start,’’ he said.

Standing on the shores of the Thames a nostalgic Dalton described today’s sail as “an historic moment” while recalling it was almost two-decades since he skippered his Whitbread winning yacht New Zealand Endeavour down the River.

"As far as I’m aware no Volvo Ocean Race boat has been brought up the Thames under the bridge since New Zealand Endeavour in 1993. It’s a long time ago now, so it’s quite historic really and a great photo opportunity."

Not even the inclement weather could dampen the spirits of the crew, who are relishing the shake-down sail after their Volvo Open 70 was refitted at England’s Felixstowe last month following a lengthy container ship trip from her home base at Auckland, New Zealand in July.

The Camper with Emirates Team New Zealand team will enjoy brief celebrations with locals before it farewells London tonight and sails to Lorient, France, where a rendezvous with French foes Groupama Sailing Team is set for September 8.

The two Volvo Ocean Race contenders will put their rivalry aside during a friendly meet and greet at a local sports stadium and unite in anticipation of the global Rugby World Cup.

Camper and Groupama 4 will part ways only momentarily ahead of lining up against PUMA Ocean Racing powered by BERG Propulsion, Abu Dhabi Ocean Racing, Team Sanya and Team Telefònica at the first Inshore Race of the 2011-12 installation of the world’s greatest ocean race begins in Alicante, Spain on October 29.