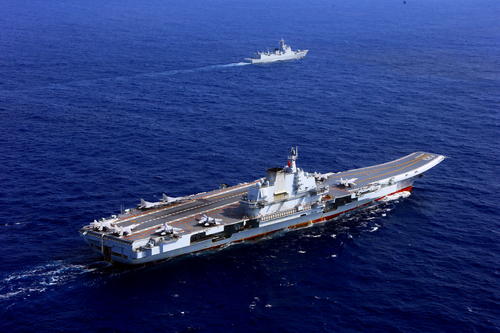 The vessel, which is near completion, will be used to train pilots and crews for future aircraft carriers.

The nine, of senior colonel or higher rank, are graduates of the country's first warship academy class in 1987 for aircraft carrier commanders, the International Herald Leader, a Beijing-based newspaper, reported yesterday.

The Varyag, a vessel bought from Ukraine in 1998 which is being fitted out at a shipyard in Dalian in northeast China's Liaoning Province, will mainly be a training platform rather than a combat warship, the newspaper said. It will be the No. 83 training vessel of the Dalian Navy Academy, according to the report.

Smoke could be seen from the chimney of the conventionally powered warship, while its radar and missile systems were also being adjusted, indicating the carrier's maiden voyage would be soon, the newspaper said.

However, the carrier may also be named after famous Chinese people according to another stipulation for training vessels.

A naming ceremony would be held after the carrier's maiden voyage, the report said.

It is widely suggested that the carrier be named after Shi Lang, an admiral in the Qing Dynasty (1636-1912) who led a fleet to Taiwan Island in 1681, or Mao Zedong, founder of the People's Republic of China.

The carrier will mainly anchor at naval bases in Shandong Province, Zhoushan Archipelago in Zhejiang Province or Yalong Bay in Hainan Island which are big enough for an aircraft carrier fleet, a military expert told the newspaper.

Cao Weidong, a researcher with the PLA Navy's Academic Research Institute, said the Varyag was a medium-sized carrier that would be equipped with engines, radar and other equipment made in China.

The J-15 fighter is similar to Russia's cutting-edge Sukhoi Su-33 and as competent as the US F-18E/F, also known as the Super Hornet, fighter aircraft, the report said.

China is building another two aircraft carriers at a shipyard in Shanghai, the Voice of Russia quoted Pavel Kamennov, an expert at the Far East Institute of the Russian Academy of Sciences, as saying.

"China has been studying closely the experience of other countries in the aircraft carrier area, so it will undoubtedly acquire adequate experience," he told the radio station.

The Varyag was originally built by the former Soviet Union, which failed to complete the ship's construction before its collapse in 1991. Ukraine disarmed it and removed its engines before selling it to China.

When the refitting work is complete, China will then become the last of the five permanent members of the United Nations Security Council and the 10th country in the world that owns an aircraft carrier.