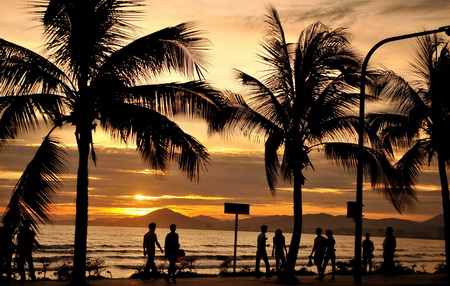 Tourists walk under sunset in Sanya city, south China’s Hainan province, July 20, 2011.[Photo/Xinhua]
China’s southernmost costal resort of Sanya in Hainan Province has seen over 5.12 million tourist arrivals in the first half year, according to statistics released by the the city’s tourism committee on Thursday.
Sanya is the only tropical coastal tourism city in China. The city has generated a total tourism revenue of 8.766 billion yuan (U.S. dollars) in the first half year, according to the statistics.
The overseas tourist arrivals to Sanya has reached 250,000 in the first half year, which was an 18.5-percent increase year-on-year.
In recent years, Russian tourists have become the majority of foreign visitors to Sanya, which enjoys financial subsidies for direct international flights from five cities in Russia to Sanya.
Russian tourists to Sanya have exceeded 100,000, a 44.7-percent increase year-on-year.
China has made it a strategy to build the Hainan Island into an international tourism destination.
The central government has offered a series of preferential policies to the island province, such as visa-free entry for travelers from 26 countries and the April opening of a duty-free shop in Sanya.
SOURCE: chinadaily.com.cn
Editorial Message
This site contains materials from other clearly stated media sources for the purpose of discussion stimulation and content enrichment among our members only.
whatsonsanya.com does not necessarily endorse their views or the accuracy of their content. For copyright infringement issues please contact editor@whatsonsanya.com

Next news: Jennifer Lopez strips off in sizzling magazine shoot for Vanity Fair