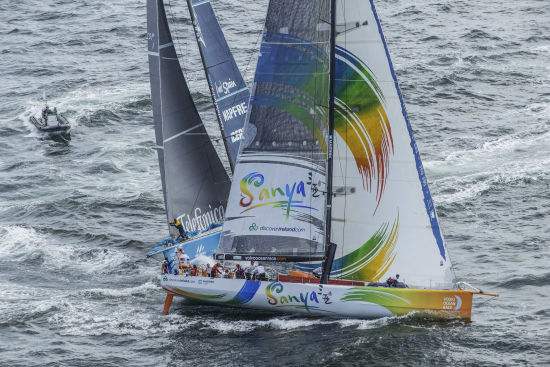 IN AN ironic twist ahead of November’s Volvo Ocean Race start in Alicante, a Galwayman has been selected for the media crew-member (MCM) position on board the Chinese entry that was announced last month.
Frankie Leonard has been signed up for the MCM role and is presently based in Hamble, UK, following a fast delivery trip and familiarisation passage from Spain on board their race entry, the former Telefonica Blue that placed third in the last race.
Skipper and past race-winner Mike Sanderson had hinted that there would be an Irish crew member on his last-minute entry for the race that is called Team Sanya after the Chinese port city that is hosting a stop-over in the 39,000-mile race.
Previous reports had suggested that the team would be an Irish-international or Irish-Chinese collaboration, but Sanderson has stressed that the entry will be Chinese-flagged only.
DiscoverIreland.com is an official team sponsor marking the connection to Galway as the race-finishing port in July of next year.
Ironically, the Irish-flagged entry from the last race had a Chinese MCM, Guo Chuan, who sailed on board Green Dragon for almost every leg and won awards for his coverage.
Leonard is the third Irish sailor confirmed for this year’s race after Damian Foxall was signed-up for the French Groupama team and Justin Slattery who is on board Ian Walker’s Abu Dhabi Ocean Racing entry.
The Galwayman began sailing aged eight at Lough Derg Yacht Club and later team-raced there while studying for his masters degree in interactive media at the University of Limerick.
He has played rugby for Connacht at under-19 and under-21 levels and is also an active member of Galway Bay Sailing Club. Last winter, he took part in the 3,000 nautical-mile Atlantic Rally for Cruisers (ARC) on an Oyster 48.
Sanderson is widely expected to recruit mostly fellow New Zealanders for his crew with a place for a Chinese crew member following trials. The entry is part of an emerging strategy that may lead to an earlier entry for the subsequent race as China seeks to broaden its sporting participation.
SOURCE: irishtimes.com
Editorial Message
This site contains materials from other clearly stated media sources for the purpose of discussion stimulation and content enrichment among our members only.